America’s Cup: Tough decisions ahead for Burling and Tuke 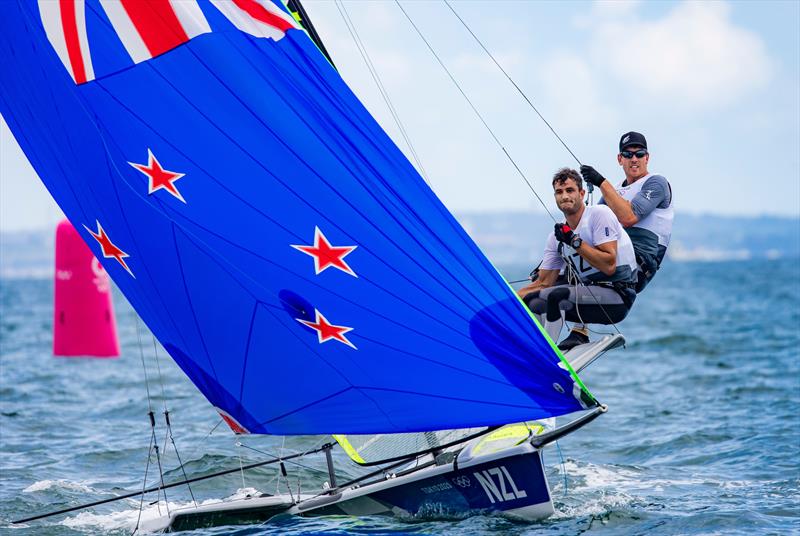 Peter Burling and Blair Tuke announced their arrival back into New Zealand, this week, with a media release making it clear the duo had not re-signed with Emirates Team New Zealand.

Once regarded as the hottest property in sailing, they have struggled at times in a competitive season punctuated by COVID.

The timing of the statement marks their entry into Managed Isolation and Quarantine (MIQ) in New Zealand, where they will be under military supervision for the next fortnight, and exiting just two weeks before the announcement of the Protocol for the 37th America’s Cup on November 17.

The dynamic duo have been away from Aotearoa for five months on a regatta circuit that has included the Olympics in Japan, and SailGP events in France and Spain. Those were preceded by SailGP events in Bermuda and Italy in April and June, followed by two weeks in New Zealand’s MIQ, before heading to Australia for a training regatta in Queensland in the 49er.

The advance of COVID into the Eastern States of Australia cut short their 49er training camp, and they returned to New Zealand just ahead of the closure of the Trans-Tasman travel “bubble,” and before exiting for Japan and another two weeks in a restricted quarantine ahead of the Olympic Regatta.

“It’s been a busy year. Since AC36 we’ve been overseas dedicated to representing New Zealand at the Olympic Games and a big European leg with the NZL SailGP Team, as well as continuing our work with Live Ocean,” they said in a written under-statement.

To recap, after winning the 36th America’s Cup in mid-March, their SailGP season got off to a difficult start with their new AC50 not being complete on arrival in Bermuda at the end of April. But they competed anyway, before heading for Spain for a 49er training regatta, ahead of a second SailGP regatta in Italy in early June. There were still teething issues with the AC50 – mainly in on-board electronic systems.

Aside from fellow Kiwis Andy Maloney and Josh Junior – who were coach and sailor in the Olympic Finn class, only one other sailor attempted to compete in the America’s Cup, SailGP and Tokyo2020. Giles Scott (GBR) won his second Gold medal at Enoshima in the Finn class, winning six of the ten races sailed. Scott, as part of the Great Britain SailGP team, sits just one place ahead of the Kiwis on the SailGP leaderboard, with two events remaining, in Sydney and San Francisco.

Scott was part of the INEOS Team UK crew who picked themselves up after an indifferent start in the America’s Cup World Series, going straight through to the Challenger Finals in the Prada Cup, but were convincingly beaten by a fast improving Luna Rossa.

[A SailGP regatta scheduled for Christchurch in late January had to be cancelled, when the NZ Government refused to allocate 160 MIQ places for incoming sailing and support teams.]

As a key part of the Emirates Team NZ Defence, Burling and Tuke surprised many by being only 3-3 after the first three days of the regatta – attributable partly to the one-way tracks, with the course location being driven by the convenience of spectator traffic control, rather than the course which offered the greatest sailing Challenge. From that position the Kiwis lifted their game to win 7-3.

After the announcement of the Protocol on November 17, and the strong likelihood that the next America’s Cup will not be held in New Zealand, some hard decisions will have to be made.

One of the lessons from the last America’s Cup, for ETNZ, is that it is probably not sufficient to go out and use a team chase boat to pick up match racing practice, or indeed any contested sailing practice. The simulator is good, but not a substitute for on the water training.

As the most accomplished match racer in the 2021 America’s Cup, Jimmy Spithill was able to get an advantage for the Italian team in the pre-start, including being able to hit the brakes on the AC75 at a critical moment.

With more Challengers in the next America’s Cup than the last, and with the teams being on an easier learning curve than in AC36, there will be much harder racing in the Challenger series, and as Defender, Emirates Team New Zealand have to match or better that level of racecraft.

Although there has been no announcement of a venue for the 37th America’s Cup, it is hard to see how Burling and Tuke (and others of their ilk) can squeeze an Olympic regatta, sail in SailGP and compete in the America’s Cup – all in the European summer of 2024.

For Giles Scott, Andy Maloney (NZL) and Josh Junior (NZL) the situation is made slightly the easier now that their boat, the Finn class sailed as the Men’s Heavyweight One Person dinghy, has been dropped from the 2024 Olympics. Several of the America’s Cup teams and sailors compete in SailGP – which remains as an excellent short sharp reality check for America’s Cup crews, racing one-design versions of the AC50’s they raced in the 2017 America’s Cup in Bermuda.

“We’re supportive of Team New Zealand management’s efforts to ensure a successful defence of the America’s Cup and respect the complexities the next event will bring in a post-Covid world,” Tuke and Burling continued in their media statement.

“As you can appreciate, we’d like clarity on the fundamentals of the event before we commit. We’re in regular conversation with the team as the process is worked through,” they concluded.

While some have speculated that the double America’s Cup champions may become sailors of fortune and join another America’s Cup team, it is hard to see how that can be possible if the Protocol for the next America’s Cup reflects the joint statement issued on March 19, by the two Royals (RNZYS and RYS).

“A new Crew Nationality Rule will require 100% of the race crew for each competitor to either be a passport holder of the country the team’s yacht club as at 19 March 2021 or to have been physically present in that country (or, acting on behalf of such yacht club in Auckland, the venue of the AC36 Events) for two of the previous three years prior to 18 March 2021. As an exception to this requirement, there will be a discretionary provision allowing a quota of non-nationals on the race crew for competitors from “Emerging Nations”.

For Emirates Team New Zealand and Luna Rossa it means that sailors like Glenn Ashby (AUS) and Jimmy Spithill (USA) can still sail for New Zealand and Italy respectively.

The only way a sailor can shift to a team of new nationality is under the Emerging Nations category. It will not be until the new Protocol is announced can it be determined exactly what constitutes an “Emerging Nation.” It is likely to be determined on a case by case basis with the two Royals, or ETNZ alone having the right to accept an Entry/Challenge from an “Emerging” team.

The kiwis in particular are still smarting from departures of six crew from the champion team of the 2000 America’s Cup to join the “emerging” Swiss team of Alinghi in April/May 2000.

Emirates Team NZ are unlikely to leave the classification of an Emerging Nation matter open to the deliberations of an Arbitration Panel, to interpret a Protocol rule and will reserve for themselves the right to decline entries not in compliance with the 100% nationality requirement for sailing crew.

Team who do comply (or undertake to comply) with the Protocol for the 2024 America’s Cup, must have their entries accepted in the spirit of the Deed of Gift, the 19th century document which governs the competition for the trophy. There is no question that Emirates Team New Zealand has the right to cherry-pick which entries it will accept and which it will not, provided they comply with the yet to be announced Protocol.

That would seem to limit the ability of the professional sailors to create an open market for their talents, which at one point saw grinders turn down salaries of NZ40,000 a month, in the 2003-2017 period. The ripple effect of those salary costs across a 120 strong America’s Cup team drives up the team budget to an unsustainable level with current…

Read More:America’s Cup: Tough decisions ahead for Burling and Tuke