A Scottish mum has told of the frantic moment she heard her friend’s son scream ‘Am I going to die?’ as two boys were blown out to sea on an inflatable dinghy.

Laura Gallagher was looking forward to enjoying a day out with her husband Kern, 34, their sons Nathan, seven, Jamie, four, and their friends Sarah and Robert Keenan who brought their son Findlay, also seven.

The group headed for a family day out at Thortonloch Beach in East Lothian on July 17, before events took a terrifying turn.

The three boys had been enjoying playing in the North Sea on a rubber dinghy, but when Jamie got off, it affected the weight of the light craft and it suddenly began drifting into deep waters – with Nathan and Findlay still on board.

Laura, 31, recalled the horrifying ordeal and said she could hear the boys screaming that ‘they were going to die’ as the vessel took off.

Laura, a pharmacy manager from Dunbar, said: ‘One moment they were right by my side and the next they were being blown away. It all happened in an instant. 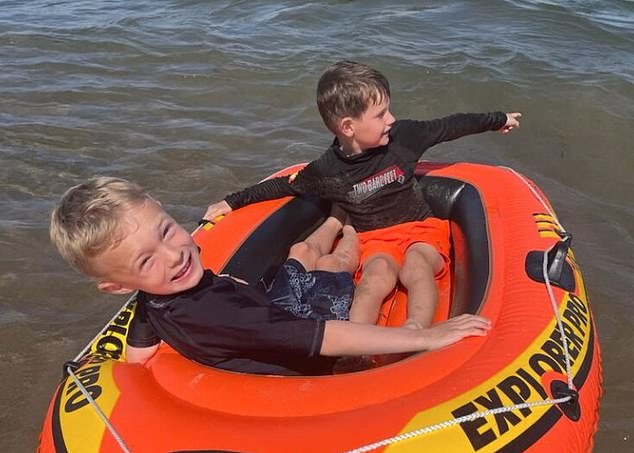 Laura Gallagher, 31, frantically jumped into the sea at Thortonloch Beach in East Lothian in a bid to rescue her son Nathan and friend Findlay after their dinghy started to drift out from the shore

‘It is a beach we go to all the time. I’d even been there earlier that week with the kids and the dinghy. It was rougher that day but with light winds and I’d held onto them the whole time.

‘On that Saturday we set up a base and the husbands got the picnic out while the children went down to the sea with the mums.

‘It was windy but the sea was calmer than it had been. That’s why I made the mistake of not holding on.

‘All three children were in the boat at first. They were playing a metre away from Sarah and me.

‘Then Jamie got out and maybe it was the change in weight that lifted it up – but the boat shot off.’

The quick-thinking mum decided to jump into the water to save the young boys, swimming frantically to bring them back to shore.

‘I was sure I was going to reach them. They were only about two metres away but I couldn’t close the gap. I was swimming breaststroke and changed to front crawl to try and speed up. 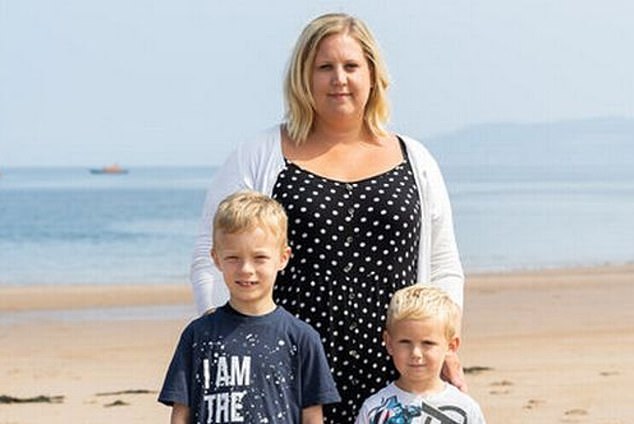 Laura, 31, recalled the horrifying ordeal and said she could hear the boys screaming that ‘they were going to die’ as the vessel took off

‘Still they kept moving away from me.

‘I looked round and realised how far we were from shore. Sarah and my husband had started swimming too but stopped as they weren’t strong swimmers.

‘Then I saw another man in a wetsuit swimming in from another angle. I thought he might reach them but they were too far out for him too.

‘I called back to shore: “Have you called the lifeboat?” I think a few people on the beach had already called for help.

‘I had to carry on swimming. The boys were crying now. Findlay was saying: “Am I going to die?”

‘They had only been two metres away from me but now they were 50 metres away.’

Thankfully a guard vessel for a ‘walking’ barge doing geotechnical surveys for the Neart na Gaoithe offshore wind farm was in the area.

The crew saw what was happening and came to their aid.

Laura said: ‘I saw the boat was coming towards them and shouted to the boys it was coming to get them. The boat gave them a wide berth.

‘There were men on each side and they managed to get the dinghy and got them both out and the boat.

‘I had a huge sigh of relief. They came for me but it was a struggle to get me on board. My legs were jelly and I was coughing. I don’t think I’d swallowed water but it had been splashing into my mouth.’

Laura hopes that by sharing the experience she can make others think twice about bringing similar inflatables to the beach.

Laura said: ‘Thankfully the boys are okay. They have been asking lots of questions since, though, like what would have happened if the boat had not come. My son has had a bad dream about it.

‘We took them to meet the workmen at Eyemouth and they took the boys back on board and I think that really helped them get over their fright.’ 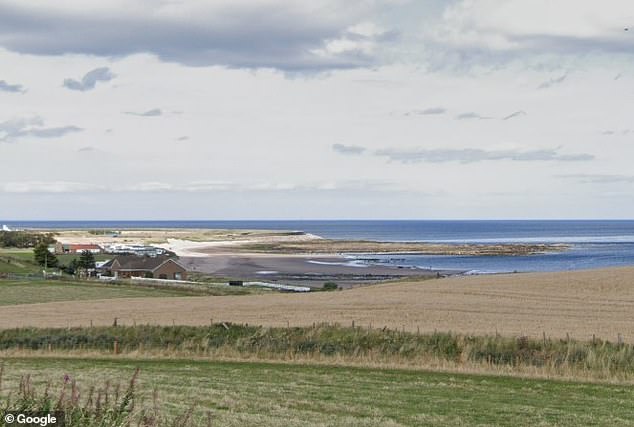 Gary Fairbairn, coxswain at RNLI Dunbar Lifeboat Station, said: ‘We want people to have fun at the beach but Laura’s story shows just how quickly things can get very dangerous. Thankfully the guard vessel was close by to help’

She said of the inflatable dinghy: ‘We bought it on holiday in Portugal and brought it home. I would never do anything to put my kids at risk but it never crossed my mind that something like this could happen so quickly.

‘I blame myself but I was only a metre away – that’s how quickly something like this can happen.

‘The dinghy has gone in the bin. The boys joined in and it was well and truly kicked before we threw it out.’

Laura added: ‘I would just like to say thank you to the crew of the vessel that rescued us, to the RNLI lifeboat crew, who helped us get ashore and were very reassuring, and we are grateful to the caravan owner and others on the beach who called the coastguard.’

Gary Fairbairn, coxswain at RNLI Dunbar Lifeboat Station, said: ‘We want people to have fun at the beach but Laura’s story shows just how quickly things can get very dangerous. Thankfully the guard vessel was close by to help.

‘Inflatable dinghies look fun but they are not suitable for our beaches where strong off shore winds can pick up at any moment.

‘We are grateful to Laura for sharing her story as warning to others.’

Read More:Boys rescued after inflatable dinghy floated out to sea