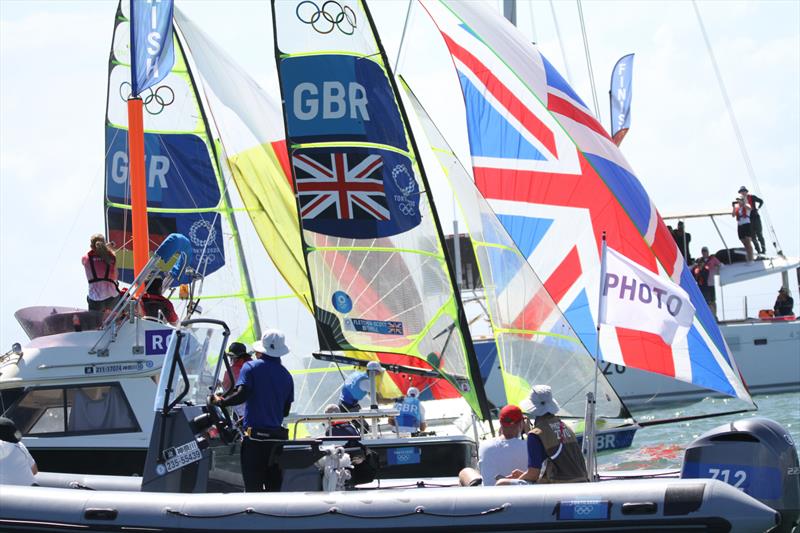 After yesterday’s deferral of all racing due to light winds, it was a busy day at the Tokyo2020 Sailing Olympic Regatta.

Four Medal races were held, four media ceremonies staged, and four media conferences held, along with another two in each of the Men’s and Women’s 470 Two-Person Dinghy.

It was also a historic day, marking the exit of the Finn class, or the Heavyweight Men’s One Person Dinghy, after 70 years of Olympic service.

“God save the Queen” was played at two of the four Medal Presentation ceremonies, stamping the British authority on these Olympics. Brits were not on the Olympic medal podium in only one of the four medal presentations

The surprise of the day was that defending Olympic champions in the 49er Men’s Skiff, Peter Burling and Blair Tuke (NZL), were unable to defend their title, missing by the slimmest of margins – which invoked a tiebreaker procedure.

In the 49erFX Women’s Skiff, Martine Grael and Kahena Kunze, also defending Olympic champions, were able to defend their 2016 Olympic title, again in a tense battle reminiscent of their win at Rio, where all three medal winners were determined within 100 metres of the finish line.

In the Finn, Giles Scott (GBR) again the defending champion, who many believed could win the Gold medal by sleep-walking to victory, such had been his dominance over the past week. However, that was not to be after he was recalled at the start and had to fight back and finished fourth – with this 9pt lead cut to just three points, on the final leaderboard.

The Italian crew of Ruggero Tita and Caterina Banti, who had dominated the Nacra 17 Mixed Multihull event all week, sailed unspectacularly to finish 6th in the Medal Race, one place behind the eventual Silver medalists John Gimson and Anna Burnet (GBR).

Defending Champion Santiago Lange and Cecilia Saroli finished out of the medals in 7th place overall but remains an inspiration to all.

The performance of Burling and Tuke was the talking point of the day and probably the regatta. So we have seen Burling extricate himself from tight competitive situations through just having the presence of mind to see an option that is invisible to mere mortals and seize the moment.

Against that backdrop, Burling and Tuke’s 4pt or two place lead looked very defendable for a crew of their capabilities.

They spent a long time pre-start sitting with their coach and expert weatherman, Hamish Willcox, now on his eighth Olympic regatta as a coach.

They sat on the wing of the 49er, facing the direction of the wind, and presumably hatching a strategy for the start and race.

Out of the start, the six-time 49er world champions opted for a port tack start right on the committee boat and headed for the right-hand corner of the course.

Their rivals, Britains Dylan Fletcher-Scott and Stuart Bithell, did the opposite and banged the left-hand corner. When the two came back together, surprisingly, there was nothing in it. However, the game of cat and mouse between the Brits, the Kiwis and the German crew of Erik Heil and Thomas Ploessel began.

There were various permutations possible between the three crews. However, most of them had Burling and Tuke winning the Gold medal either outright or on a countback.

In the end, the funky seabreeze decided the outcome, bringing the British and German crews together on the startline, with both approaching on opposite gybes and with the Brits being on the port gybe and the give-way boat.

As the two boats came together, Fletcher-Scott and Bithell took a leaf out of Burling’s playbook, seized their moment, gybed between the Germans and the Committee Vessel, and by the narrowest of margins – recorded as two seconds. The Kiwis finished a very safe third and could only watch as their worst-case scenario played out.

In finishing first with the Kiwis in third, the Brits finished equal on points and won on the basis that a tie is broken in favour of the better place in the Medal Race.

While the talking point will be about the narrow margin and the way it played out right on the finish line in the final race.

The reality is that finishing just one place better in any of the previous 11 races would have given the Gold medal to Burling and Tuke.

Today’s four Medal races, along with two yet to be completed, should have Britain emerge as the top sailing country, with three Gold medals, 1 Silver and 1 Bronze.

The final two Medal races in the Mens and Womens 470, with Australia assured of a Gold Medal in the Mens 470.