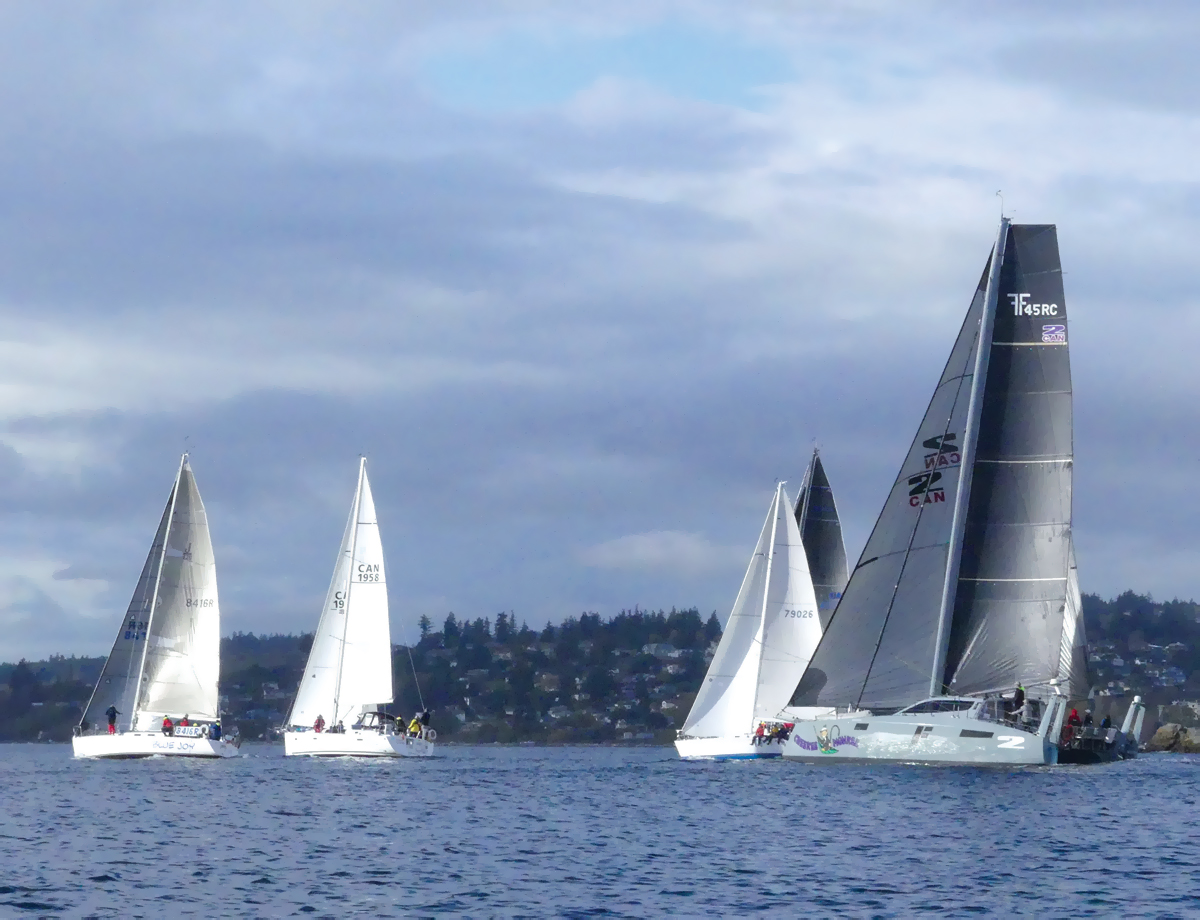 Teams in the Cascadian Convoy sailing competition overcame a fierce autumn storm and container ship spill and fire to complete their races.

The sailing competition, which took place Oct. 23 to 25, is part of the Vancouver Island Racing Series. It was hosted by the Canadian Forces Sailing Association (CFSA). Several sailors from the base posted strong finishes in the convoy, which served as a qualifier for the Van Isle 360 and Vic-Maui International yacht races.

Bomb Cyclone and the unexpected

The storm, dubbed a ‘bomb cyclone’ by forecasters, was centred off the west coast of Vancouver Island for most of the weekend. Meteorologists called it the strongest storm to ever hit the Pacific Northwest with a barometric pressure dropping to 942.5 millibars, strong winds and gusts of 90 km/h, and an atmospheric river of heavy rain. Then, a shipping accident aboard commercial freighter Zim Kingston on the eve of the race further complicated matters for organizers.

“From a race organizer’s standpoint, saying that we successfully overcame our fair share of adversity and everything that was thrown at us on a wild and challenging weekend would be a gross understatement,” he adds.

The race course did not see storm force winds until later in the day on Oct. 24, long after all boats had crossed the finish line.

However, on Oct. 22, the container ship spilled 106 shipping containers into the sea at the western approach of Strait of Juan de Fuca. A fire erupted aboard the ship the next day while it was anchored between Race Rocks and Discovery Island.

After careful review of the modelling of the sea conditions, weather forecasts, and the number of obstructions, the decision was made to continue the Long Course Race but change the race course itself.

Organizers steered boats away from the floating shipping containers and extremely rough seas, changing the planned turnaround point at Port Renfrew. Instead, the race course was reduced from 100 nautical miles to 68 and ran between Secretary Island near Sooke and D’Arcy Island near Sidney.  As the fire on board Zim Kingston developed, the organisers consulted with the Regional Joint Operations Center and imposed an exclusion zone around the ship.

“The race was shorter, but added tactical complexity as racers had to navigate through more complex obstructions near Discovery Island,” says LCdr Maier. “In the end, the race was well organized and safe and everyone who started the race finished it. If we had any indications that the sailing conditions were unsafe we would have cancelled the races.”

Race headquarters were located in the Admiral’s cottage in Dockyard, in close proximity to the start and finish line at Duntze Head. Throughout the weekend LCdr Maier and his team of volunteers were in touch with the RJOC, the Joint Rescue Coordination Centre, and Seattle and Victoria’s vessel traffic management organizations to ensure the safety of the participants. 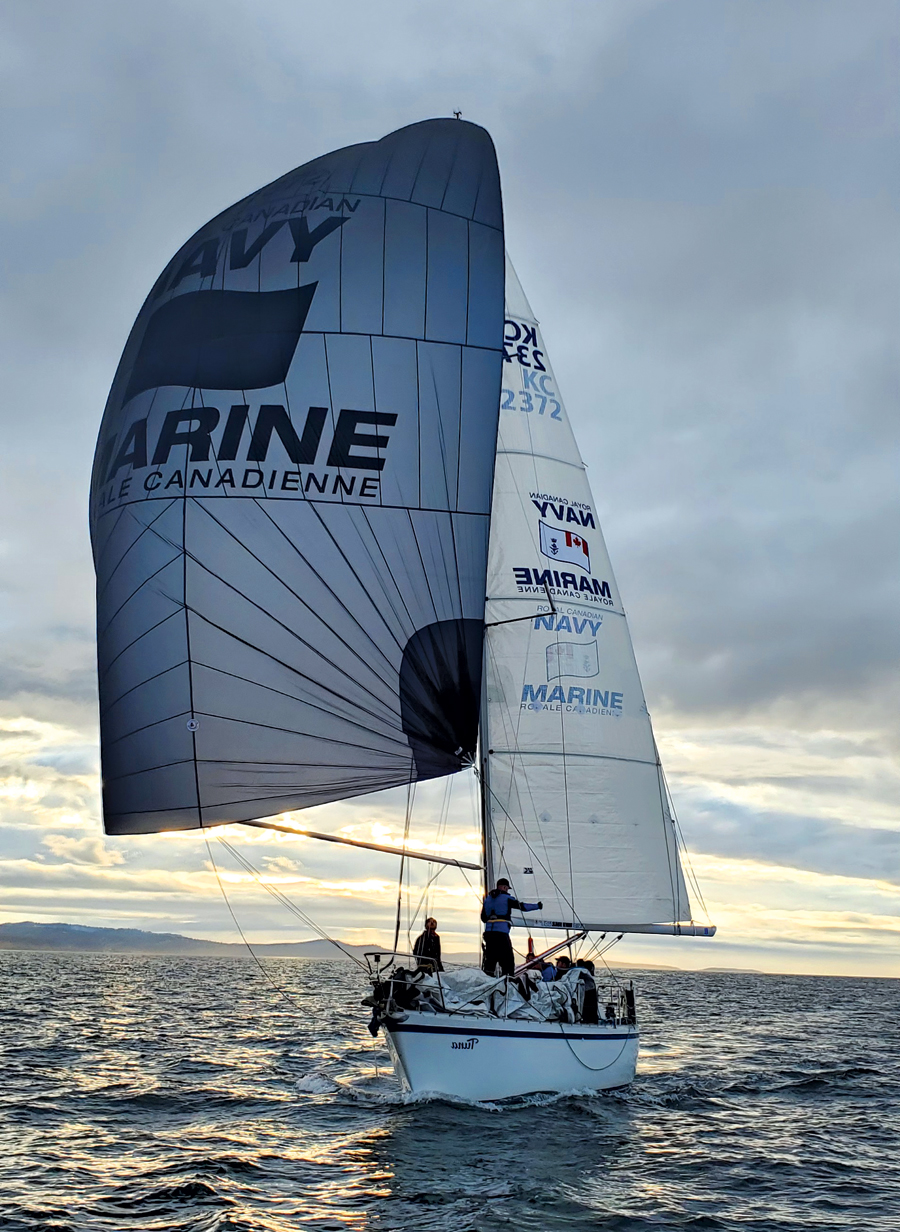 The long-distance race offered an exciting finish, noted LCdr Maier, with four boats finishing within 20 minutes of each other’s corrected time in the weather and obstacle-shortened 68-nautical-mile course.

In the medium course there was an impressive finish from Unleaded, a catamaran from the Royal Victoria Yacht Club, and defending champion Jack Rabbit of the CFSA was first to cross the line.

The second division race in the medium course saw an incredibly tight battle. Sailors from the base, including Lt(N) Tom Eagle and Capt(N) (Retired) Kevin Greenwood, guided their sailboat Hessian to a first place finish. CFSA team Dark Star finished runners-up in the race.

For complete results of the Cascadian Convoy visit the web page https://theclubspot.com/regatta/0aqEn06GEH.

For more information about the CFSA and its recreational sailing programs visit their website http://www.cfsaesq.ca