College student Drew Maglio explains how he turned a $10,000 investment into a smart $17,000 speedboat.

As the maxim goes, wind and tide wait for no one and just outside of the breakwater exists another world. To some, boat ownership is insanity, as boats require constant maintenance and are always breaking.

But I would argue that few other activities afford such opportunity to transcend the humdrum of modern life.

I had just $2,000 when I set out with the dream of owning a bluewater yacht. It wasn’t an easy journey, and my fiancée and I learned some tough lessons along the way, but two years and three boats later we couldn’t have been happier with our 24ft motorcruiser. Here’s how it all began… 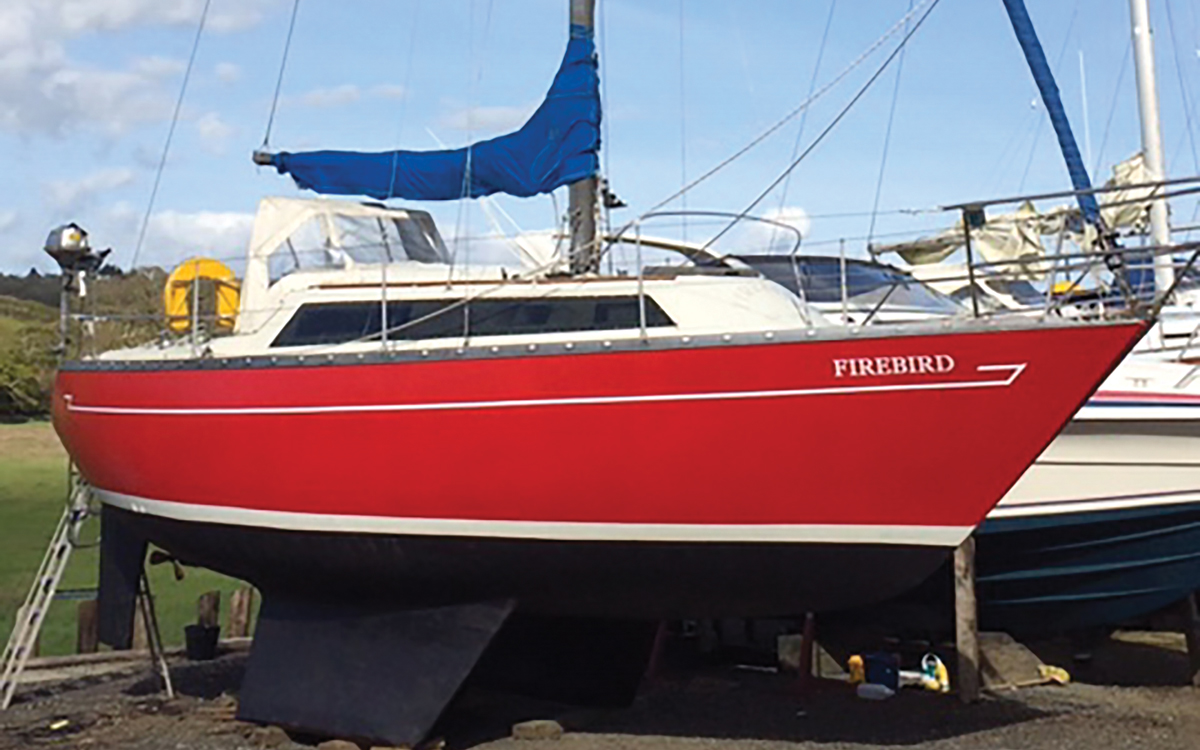 Growing up sailing on the East Coast it’s fair to say that I caught the bug pretty early on. Family… 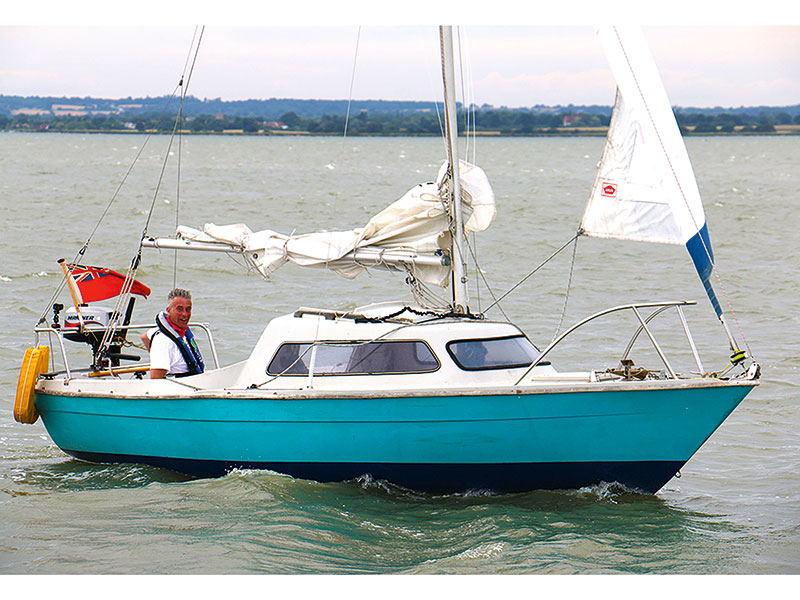 It’s a fact: getting afloat in a boat of your own has never been more affordable or accessible. Let me…

I was 10 years old when my parents sold their 21ft Chaparral 2100 SX bowrider, on which we’d cruised Florida’s East Coast. My thirst for adventures on the water, however, had not yet been quenched and two years later I bought an 8ft imitation Boston Whaler for $400 that I kept in my parents’ backyard.

That little bathtub was used in a typical Florida river – that is, nothing more than a man-made drainage canal. I rambled about in it for a few years, but it filled with rainwater and sank more often than it traversed the placid, often disgusting, brown waters of the canal.

When it was sold and towed away for more than I had initially paid, I was relieved. I’d made a small profit and my parents were ecstatic to no longer have it scarring their embankment. I was now boatless, but my longing to be out on the water persisted throughout my high school years.

Fast-forward to May 2014 and my fiancé, Avery, and I had just completed our first year of university in West Palm Beach, Florida. We were invited on a dinner cruise on the Intracoastal Waterway (ICW).

As the guests mingled, Avery and I stood at the bow peering into the glassy water. At that moment I knew I had to have a boat again. Somehow, some way we were going to own a boat.

I searched the online adverts. Because of my motorboating experience as a child, I wanted an open bow boat with a sterndrive engine.

This wasn’t the wisest choice for Florida’s briny waters; sterndrives generally have raw-water cooled cast-iron engine blocks, which are susceptible to rust. Plus, they can’t fully trim up in shallow water.

However, I have to say that we’ve since had reliable sterndrives over the years. Nonetheless, while browsing the classifieds I found a bowrider that piqued my interest: a 1996 Regal Valanti SE 202. 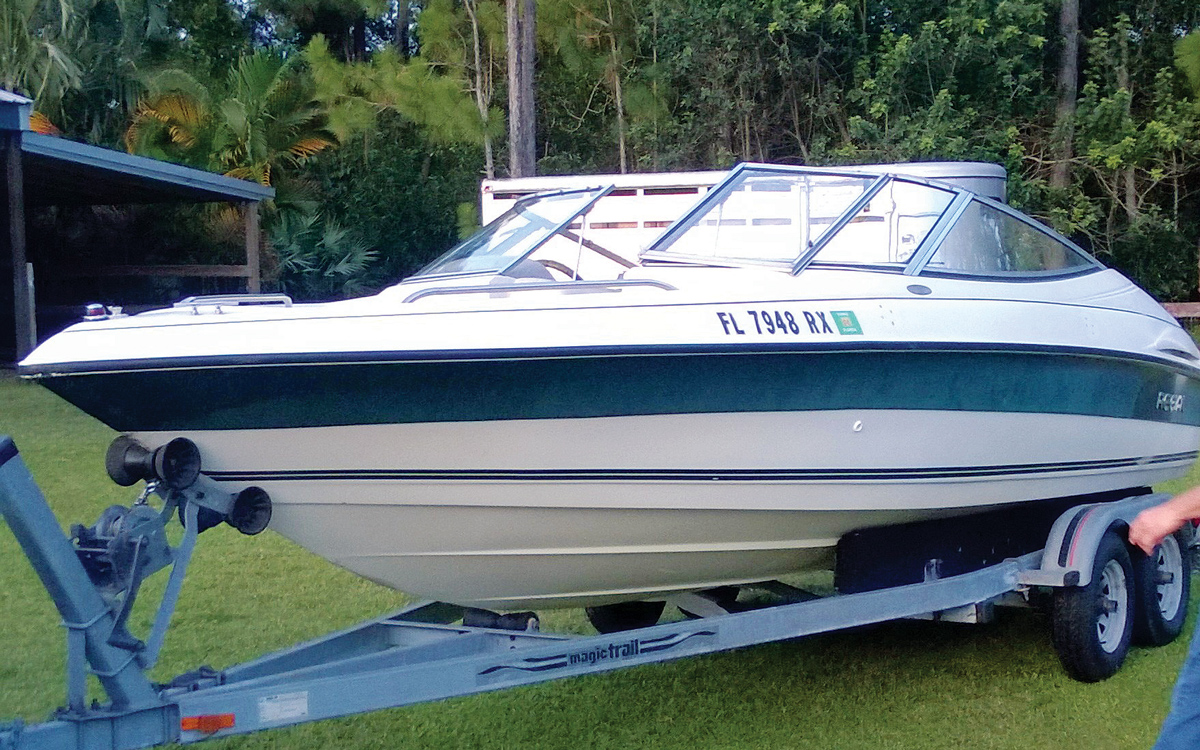 The Regal on its trailer

We should have heard the faint last gasps of the dry-rotten and disintegrating vinyl. We should have noted the dark and rotten wood in the crazed ski locker, that we now know is a sign of catastrophic structural decay.

Similarly, the owner’s comment that ‘she needs A LOT of work,’ should have rang an alarm bell.

Nonetheless, the owners, who were ‘moving and had to sell their boat immediately’ demonstrated that, despite the ghastly outward appearance, the boat’s mechanical heart was operable. 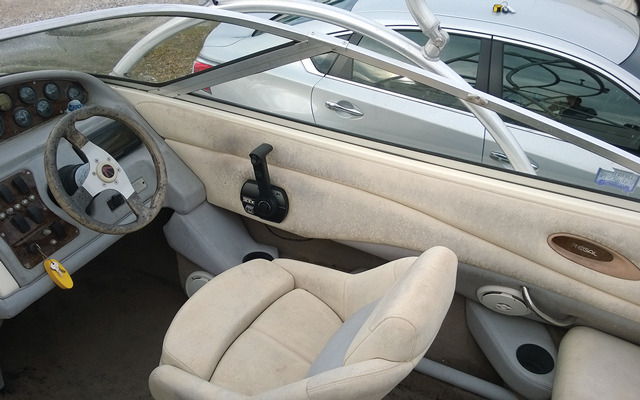 Worn vinyl of the Regal Valanti

On Saturday of that same week, we were now the accursed owners of someone else’s junk – and to make matters worse we’d paid $2,100 for the entire package!

Avery and I, plus a few helpful friends laboured all summer on that boat. I changed the oil, oil filter, spark plugs, replaced the exhaust manifolds and risers (which corrode quickly in warm salt water), replaced the circulating water pump which was defunct, and replaced the gear lube (which was milky) and impeller on the Alpha One Gen II outdrive.

Things that now take me minutes, took hours – even days – on our first go around, and blunders were inevitably made. By July, we were finally satisfied to attempt sea trials, and away we went to the boat ramp, buzzing head to toe with nervous excitement. 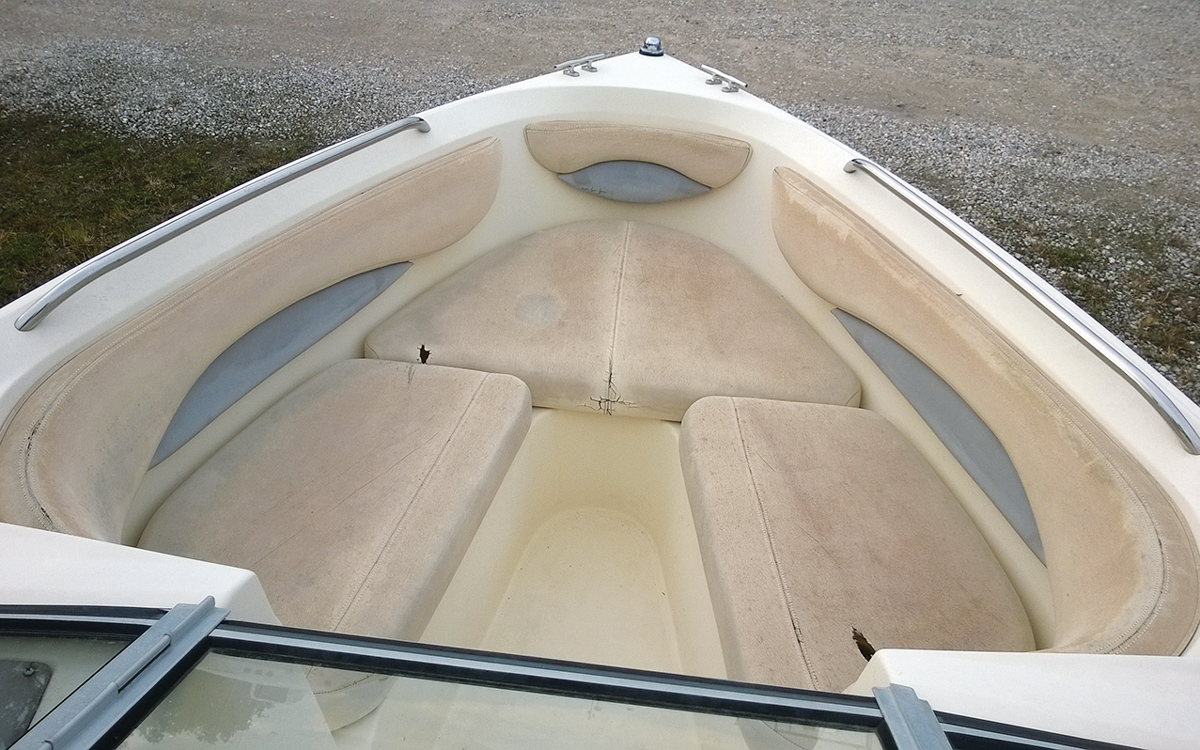 This was it: South Florida’s salty waters were to be the judge ofmy mechanical prowess.

Upon launching the boat, all systems checked out and the engine came to life. The gearstick was a bit sticky, but after fiddling with it we headed north to Jupiter, Florida, my old childhood haunt.

About halfway, we noticed that we were taking on water, but couldn’t be sure if it was coming from the engine, sea, or both. 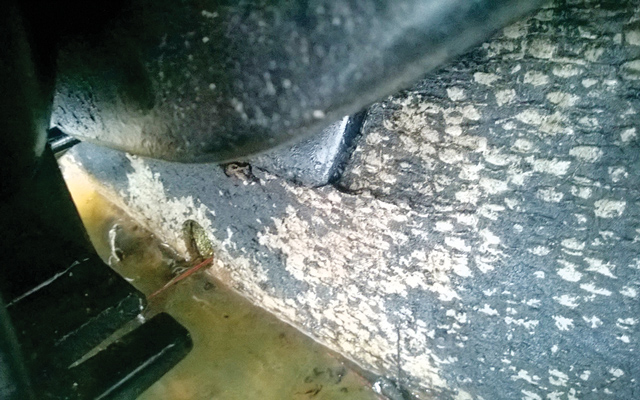 …but the crack in the transom was serious

There was a sheen in the bilge, but it could have easily been the byproduct of the many different types of fluids that were changed before our journey. It was minuscule, however; the bilge pump would easily keep up – or so we figured.

We proceeded for another mile before turning back to the boat ramp, where we hauled the boat out of the water and drained gallons of water from the bilge and ski locker.

It was apparent that the adhesive sealant I’d tried to smear between the transom assembly and transom had failed to do its job and that was the source of our leak.

I trailered the boat to my friend’s house so he could have a look and he jumped up and down on the outdrive, declaring it to be fine. “Tighten the inner transom plate bolts,” he insisted – an almost impossible task with the engine in place.

I contorted myself into the back of the engine bay to tighten the bolts – and when I did, the transom fibreglass skin cracked! At that moment I knew that we’d bought a worthless and rotten boat!

I was extremely frustrated as I’d wasted months of labour and thousands of dollars! Avery, however, was more level-headed: “Why don’t we buy another boat with a bad engine and swap ours in?” she suggested.

“Eureka!” Thus began the search for a nice boat with a dodgy engine, across the entire south-eastern US. I wanted a Chaparral 2130 SS this time and found a nice one in rural Virginia with a kind owner who was willing to work with us.

However, whilst visiting family in Alabama, we took a look at another I’d seen online. The owner was cleaning her as we approached, and beneath the cocoon of diesel dust was glimmering and pristine gelcoat. The interior was even nicer, with pliable white vinyl and a beautiful turquoise carpet. 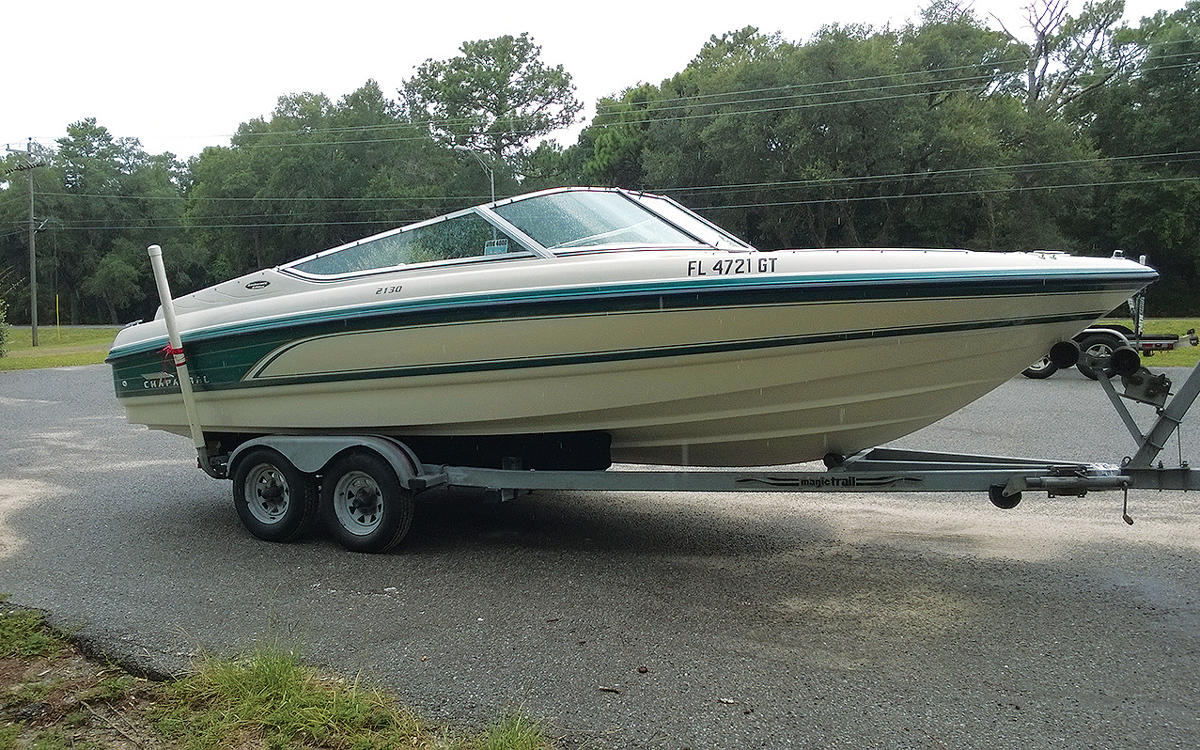 Chaparral 2130 SS on its trailer ready for the journey home

After thoroughly tapping all surfaces, I was certain this boat was solid as a rock. The owner, a kind woman who had recently been widowed, was asking $4,000. We offered $2,000 before eventually settling on $3,000 – but we would have been thrilled to pay full price!

The boat had been sitting inside a dry stack marina for 11 years without being touched! Our parents thoroughly rebuked us for our folly. “Didn’t you learn your lesson? Boats are nothing but trouble.”

Despite their admonishments we pressed on with the project. In just a week, we stripped the old Regal of its engine, outdrive and wakeboard tower but kept the trailer and stainless steel propeller, which were near-perfect matches for the new boat. 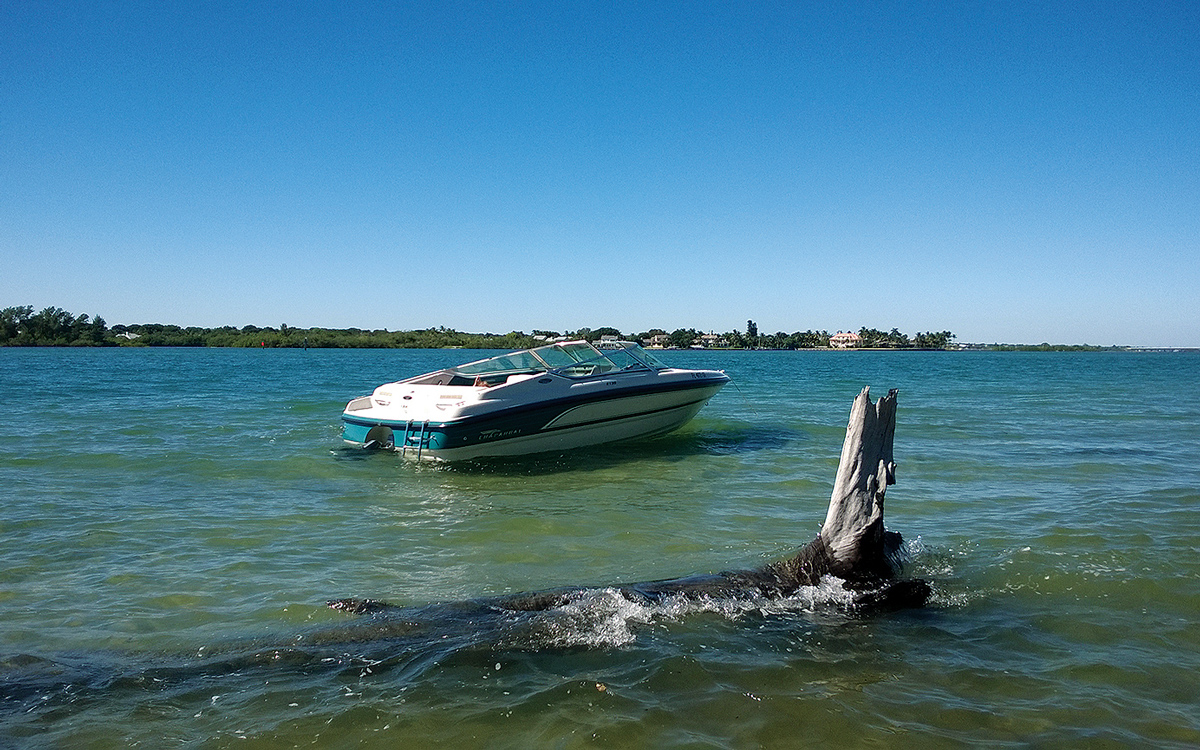 But instead of fitting the Regal engine, we sold it – together with the outdrive, transom assembly, wakeboard tower and the hull – for a grand total of $2,200 – meaning we’d made $100 on what was a terrible purchase!

Next step, after towing the Chaparral 10-hours home, was to test the ‘blown’ engine. Luck would have it that the old 5.7lt GM V8 and Yamaha sterndrive sputtered to life. What a jubilant moment. 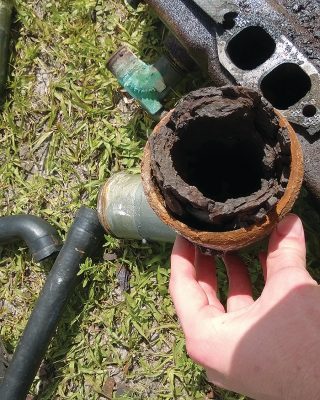 Coolant inlet riser was cracked and clogged with rust so needed replacement.

Though the road to the boat ramp would be full of potholes, we seemed to have caught a break, if only for a minute!

Despite running, the engine was in dire need of an overhaul. It had never seen fresh water, and was a rust bucket.

Fortunately, I came across some anecdotal evidence to suggest GM cast iron engine blocks are extremely thick and take over 30 years to rust through.

Hopefully the ghastly appearance could be ameliorated with some elbow grease.

Over the next two months we overhauled…

Read More:Climbing the powerboat ladder: How I bought and sold 3 boats for a $7k profit