When my partner, Dave, has a mad idea, he normally finds a way to make it happen. “I’d like to sail across the Atlantic,” he declared one day. “Uh-oh!” I thought.

We were already liveaboards – we had a motor-cruiser that was suitable for winter jaunts down the French Canals and earned us a living as a passenger ferry across the River Exe. But it was hardly suitable for an ocean crossing.

We needed something bigger, sturdier and, most importantly, with sails. 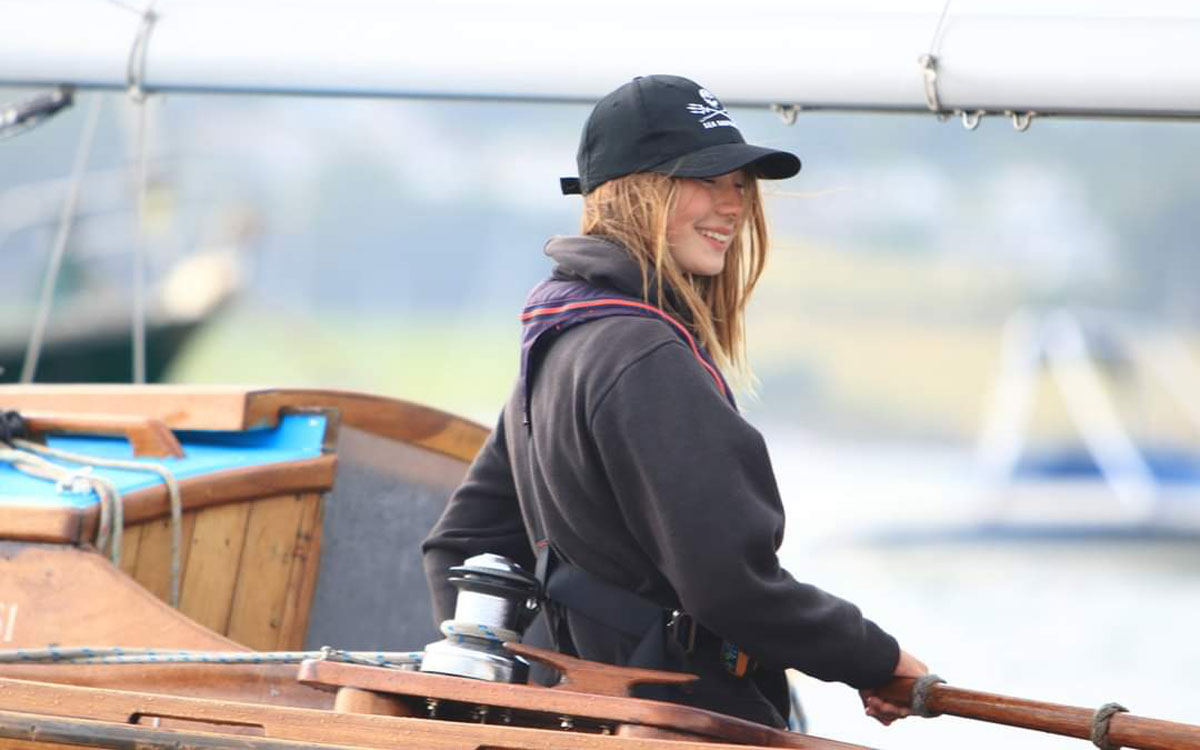 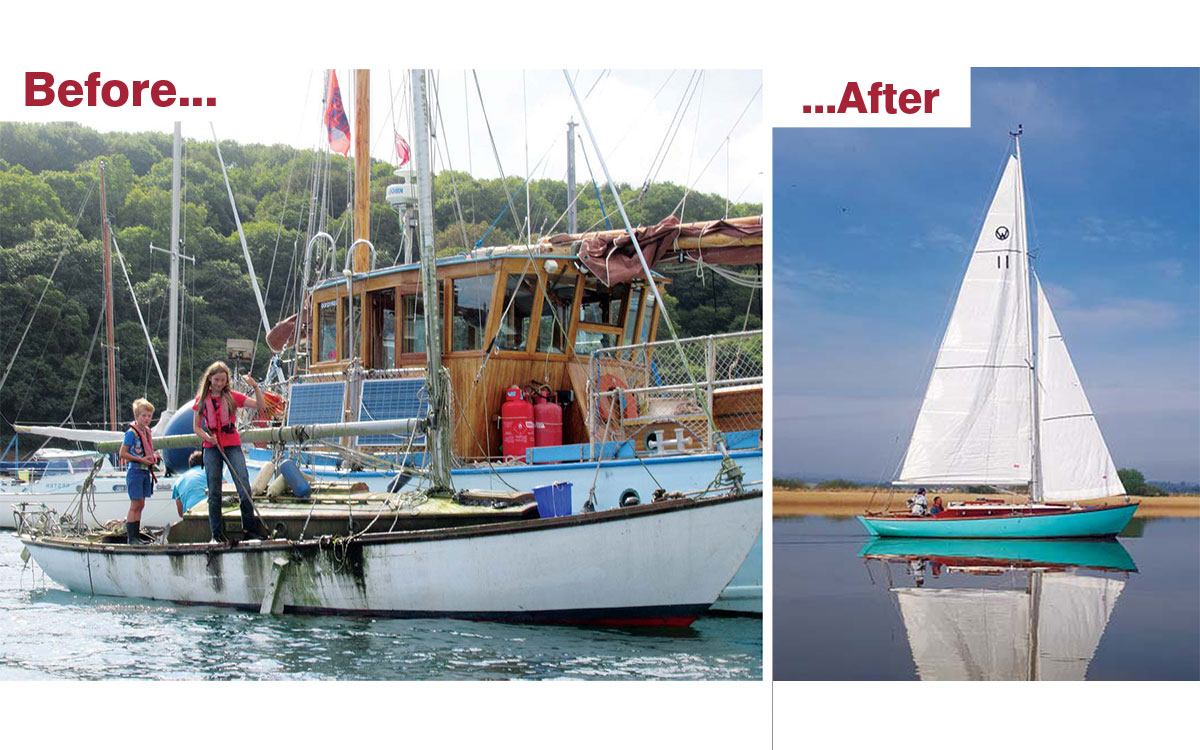 My name is Katie, but I prefer to be called Sade (pronounced Sayd). I am 13 years old and over…

How not to berth a massive motor-cruiser…

I had no experience with boat renovations but Dave had rebuilt several wooden boats, including Sea Dream, the 40ft ferry boat that we now lived and worked on.

We decided to look for an old fishing boat to convert to a motor-sailer. There was a lovely old Scottish trawler in our home port of Topsham but he wanted more money for it than we could afford.

Newlyn was supposed to be full of decommissioned fishing boats so we set off in our little silver Metro to investigate. We drove miles around Cornish country lanes but there was nothing in Newlyn and no new leads. After a seemingly fruitless search, we stopped in a café to regroup.

On the table was a FreeAds magazine and, flicking through, Dave spotted an advert for a 50ft decommissioned fishing boat sitting in Polruan. After a quick phone call we found ourselves on the last ferry of the day, with just time for a quick look on board.

Heads hunched under the deck, we looked around the dark, damp boat. All the running gear had been taken off to go on the owner’s newly built steel fishing boat. There was nothing inside but peeling paint and it certainly didn’t have the headroom Dave had said was essential. But as the ferry pulled away, he gazed back at the boat. “She’s got lovely lines,” he murmured, and I knew the decision was already made!

We put an offer to the seller. He didn’t accept it immediately, but after two weeks with no other interested parties, he took it. Within a day, we’d borrowed a friend’s powerful Lochin motor boat, and were towing our new purchase back to the Exe. 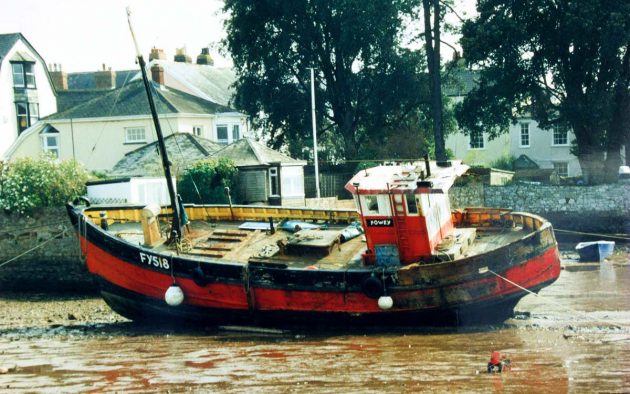 Now the fun began – where to start?

The boat came with huge legs so we bolted them on and put her aground in Hannaford’s Quay, a traditional spot for boat repairs. While Dave started removing all the big steel hatches and metalwork on deck, he set me up with a bottle of gas and a triangular scraper – burning all the paint off the hull. It seemed an impossible task with such a tiny implement, but bit by bit, we got the whole hull down to bare wood, inside and out.

Compared to Sea Dream, the timbers on this boat were massive. The frames were 3in thick, every 15in along the hull. The beam shelf alone was 8in deep. Some of the inside faces of the frames were going a bit ‘fluffy’ but when we sanded them back a little, the wood underneath was surprisingly solid. We doubled up 5 or 6 frames that were looking a bit questionable, but all in all, it seemed like we had ourselves a fairly solid boat!

We liberally dosed everything with a good quality wood treatment then coated the outside with aluminium primer and painted the bottom with antifoul. On went a coat of undercoat then a light blue topcoat. Suddenly, she looked like a real ship again.

We were fitting in the scraping and painting around running our ferry – which ran daily at lunchtimes and evening trips three or four times a week. We could squeeze in an hour or two of work in the mornings and three or more hours in the afternoons. Of course, the tides changed constantly so sometimes we had to row to the boat in a dinghy, other times we had to walk out in wellies through the mud. There were times when I found myself perched up a ladder, only to look down and find the water lapping around the bottom of the ladder! 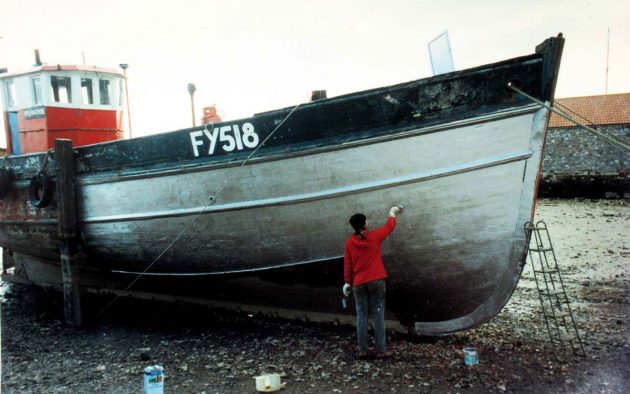 It wasn’t safe to leave the boat aground on legs forever – it can get extremely rough in Topsham in winter storms – so we needed to organise a mooring for the boat. We tried a drying mooring first but the boat rolled over at an alarming angle – possibly endangering the boat itself and definitely not good for working on. Thankfully, with a little persuasion on Dave’s part, we were given permission for a fore-and-aft mooring off Turf Locks, in the only spot deep enough for her to float at all tides.

Our next job was the engine. Dave had already decided he wanted a Gardner diesel – old-fashioned but reliable workhorses that can go on for years. We heard of a pair that had come out of a pleasure boat in Torbay. One had a broken crank so the owner had simply taken them both out and bought two brand new engines. We got the pair for a fair price, and Dave soon had the good engine turning over. The broken one still had plenty of good bits to keep for spares.

Dave cleaned up the good one, degreased it and sprayed it red. We had it running briefly at the local boatyard, before they craned it into the old engine bay (near the bows of the boat) and it sat there, wrapped up in plastic, until further notice. 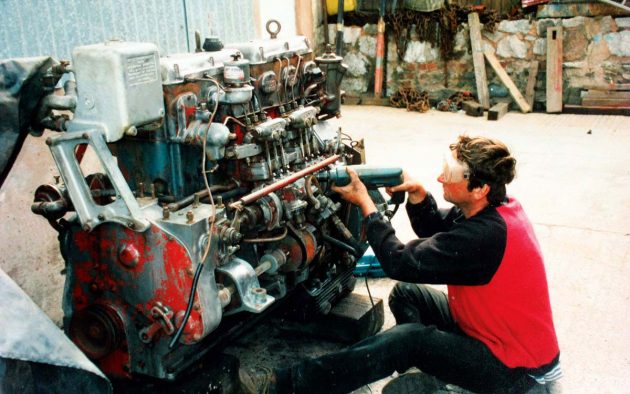 Back on the mooring, we started to rip off the top planks which cladded the bulwarks. Dave decided to raise the decks 18in up to the top of the existing gunwale to give us full head height across the whole boat, and eliminate a common point of rot on boats like this – where the frames go through the decks.

We spent several hot days bent over the gunwales, levering the old planks off with a variety of huge crowbars. Once off, we could put the new beam shelf in place, made from 5in x 2in lengths of oak. With no planks on the outside, we were able to use the frames to clamp to, and let the oak bend round slowly over several days. This is where green oak was a bonus, as it’s more supple and less likely to crack. The stern of the boat was the trickiest, with a surprising bend around its canoe stern.

By this point, we’d done as much as we could on the mooring in the middle of the river, and needed to come alongside to get all the hefty materials on and off. We towed Ros Ailither back up to Topsham Quay, and tied her alongside next to the Lighter Inn. We built a scaffold structure around the boat and lashed on a makeshift tent from old lorry tarps so we could work through the winter months.

The next job was to take off the old deck planking and put in new deck beams. We did this little by little so the boat would keep her shape. Dave prised up sections of the old Douglas Fir deck and left the old deck beams underneath. We cut new beams from 3in oak, placed them on the brand new beam shelf and bolted through the frames. Only then did Dave take out the old beams from underneath.

I’d carefully measured all of the boat’s vital statistics and drawn her to scale. It was fun to draw out all the possibilities for the layout inside.

It all depended where the engine went. Originally, it sat near the bows, with a 25ft long prop shaft, but that took up a lot of room and split the living accommodation, not to mention the cost of a new shaft that size. So putting the engine at the stern would maximise the living space. 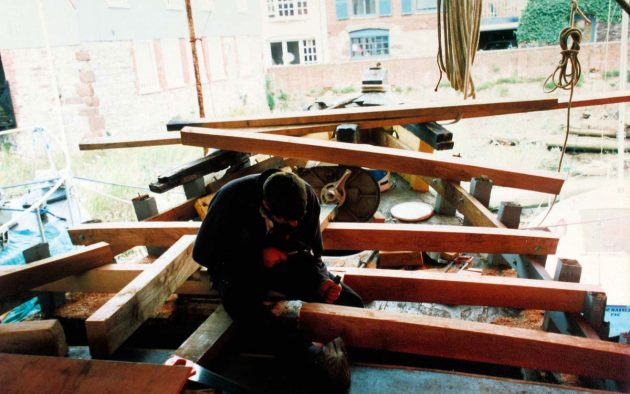 Dave wasn’t yet sure how to mount the running gear and was looking into the possibility of using a hydraulic drive or electric motor. One thing he knew was that he wanted to be able to take the engine out if necessary, having seen a friend have to literally chop a hole in the deck to get a broken engine out. So we designed a big opening in the centre of the boat, slightly smaller than the old fish hold cover. The…