It was game on immediately for two Irish rivals at the Olympic 49er skiff class world championships in Mussanah, Oman on Tuesday. A new Royal Cork combination took a race win in their opening round while their Dublin rivals for the single Paris 2024 place won the last race of the day.

Cork dinghy ace Johnny Durcan with Tokyo campaigner Séafra Guilfoyle won their championship opening race in their flight. A ninth and an 18th followed, leaving the debutantes in the 18th, a mid-fleet overall standing at this early stage. 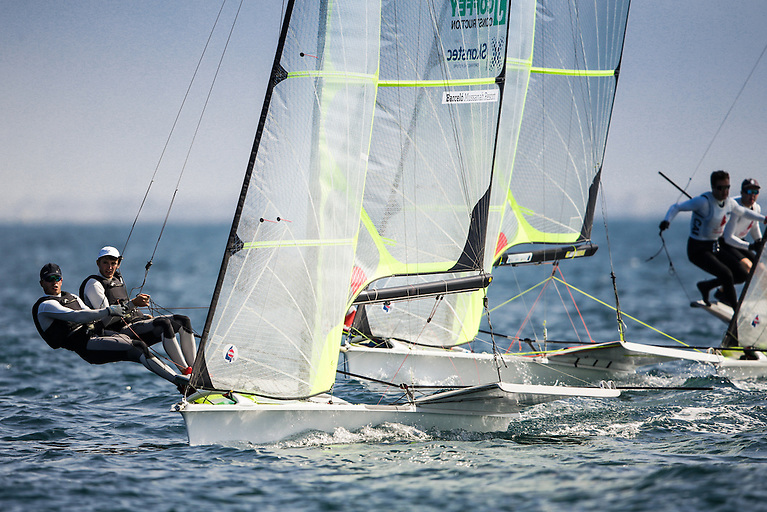 The North Dublin pair had a 14th then tenth place before winning the third race to finish 14th overall.

Britain’s Jack Hawkins and Chris Tomas, who are looking to emerge from the shadow of training partners of Dylan Fletcher and Stuart Bithell, the Tokyo 2020 gold medallists are tied with the French pair of Kevin Fischer Guillou and Noe’ Delpech. Both are experiencing their first tastes of sitting atop a big championship.

With only the two 49er fleets needing to sail qualifiers through Thursday, the fleets are aiming for three races each day. Though the shifty warm breezes kept the scores of even the leaders mixed, the sunshine will be the only consistent factor this week.

The Path to Paris will have new faces. Otto Henry with Miles Davey (AUS) and Hernan Umpierre with Fernando Diz (URU) sit third and fourth on the 49er leaderboard respectively. They represent the next generation of skiff talent who have grown up sailing fast and upskilling through a combination of video and extreme sports. Of the four, Diz is the oldest born in 1999, the rest were born in the new millennium and it doesn’t look like they’re interested in starting from the back of the fleet and moving up.

The Uruguayan pair won the Asian Championship as the warm up to this year’s worlds. They have moved to Cadiz, Spain, for their university studies, but it’s clear their passions lie in sailing. Likewise, locked out of Australia, the young pair have been in Europe all summer racing and training, before they are allowed back home eventually.

The qualification round continues for another two days to determine the Gold and Silver fleet splits for the final game that concludes the event on Sunday (21st November 2021).

The venue has experienced light airs for the past two weeks, but a sea breeze on Wednesday has been forecast.