Princess V48 owner Elliott Maurice battles steering issues, notorious reefs, dangerous reptiles and the might of the US Navy to visit some of the East Coast’s most historic harbours en route to New York and the Great Lakes.

This is Part 3 of our Cruising the Great Loop series, make sure to read Part 1 and Part 2 first.

Commencing a 115nm leg of a 2,500nm cruise with mechanical issues is never a desirable option, particularly across open ocean. Our only hope of reprieve is a respected outfit of marine engineers kindly recommended by Fairline after a call to a friend who works for the brand.

An electronics specialist, a plumber and a mechanic are awaiting our arrival in Charleston. But first we have to get there. As the British navy’s former gateway to the Caribbean and the northern end of the Bermuda Triangle, we’d planned to spend three days in Charleston so at least we had time on our side.

The new boat is a faithful recreation of Ernest Hemingway’s original but with modern engines and comforts. Photo: Billy Black

Founded in the 1670s, it is steeped in history including, sadly, as a former centre of slavery. However, these days, it is one of the most beautiful and cultured cities in the US as well as the home of several legendary US warships. Our reservation at Patriots’ Point Marina offers the perfect base for our stay.

The leg from Savannah, Georgia, along the South Carolina coast involves a short route out of Ossobo inlet followed by a 100-mile open water stretch without any worrisome shoals, reefs or tides, finishing in the wide, safe confines of Charleston Harbor. With this in mind, an early start and thorough briefing about the importance of monitoring the engine temps and pressures were essential.

We’d made a temporary repair to the hole in the starboard engine’s exhaust but not before it had covered my lovely clean engine room in black soot! The risk of further overheating also meant restricting our speed to a lowly 22 knots for the five-hour ocean passage. At least the 2-3ft following sea should make it a relatively peaceful one. 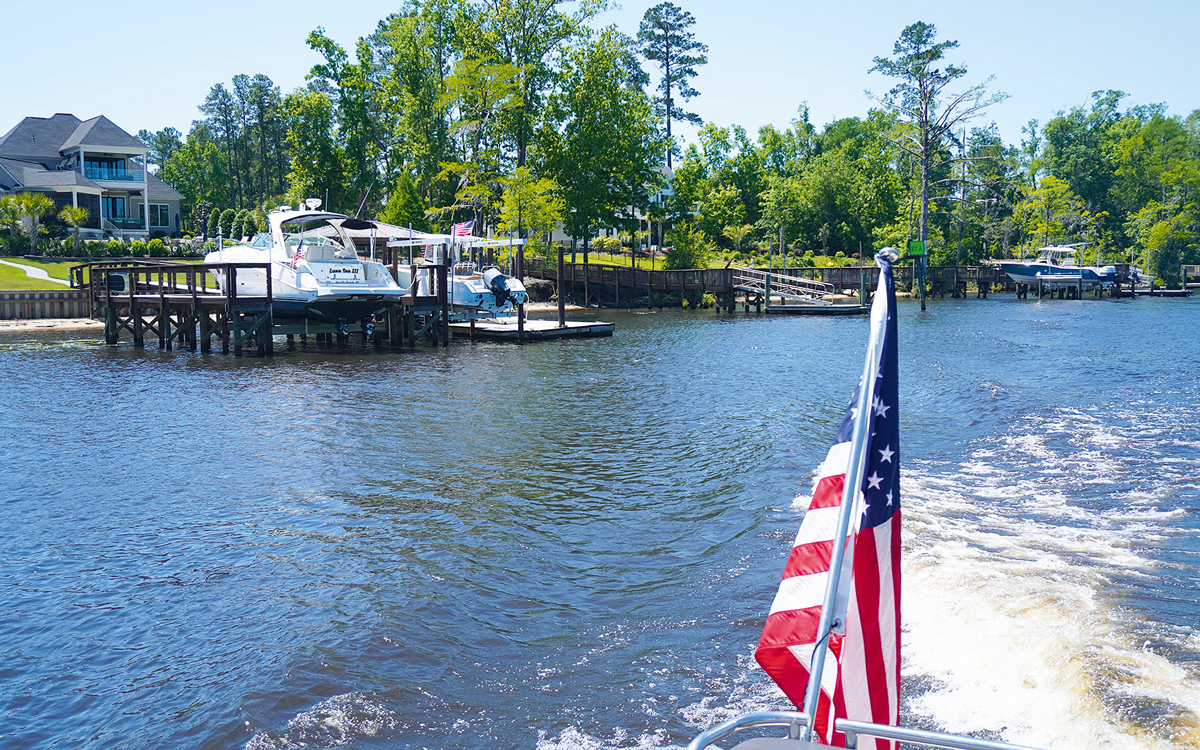 We push off at around 7.30am, enjoying a gentle 6nm cruise out into the ocean before turning North towards Cape Hatteras and up the coast of South Carolina. The first three hours go as planned until, out of the blue, the engine management system shrieks out a warning signal. Low fuel pressure on the port engine.

I shut down the motor immediately and open the engine hatch to take a look. Having had numerous experience of dirty fuel in the Bahamas, I have an inkling of what it might be. But first I need to rule out the more worrying possibility of a leaking hose or fuel pump.

Large turbo diesels generate a lot of heat, so the engineroom is not my favourite place, especially on a hot day in the open ocean. Wrapping my arms in towels to avoid burns, I prostrate myself across the hot engine to get to the fuel pump on the far side of the Volvo D9. 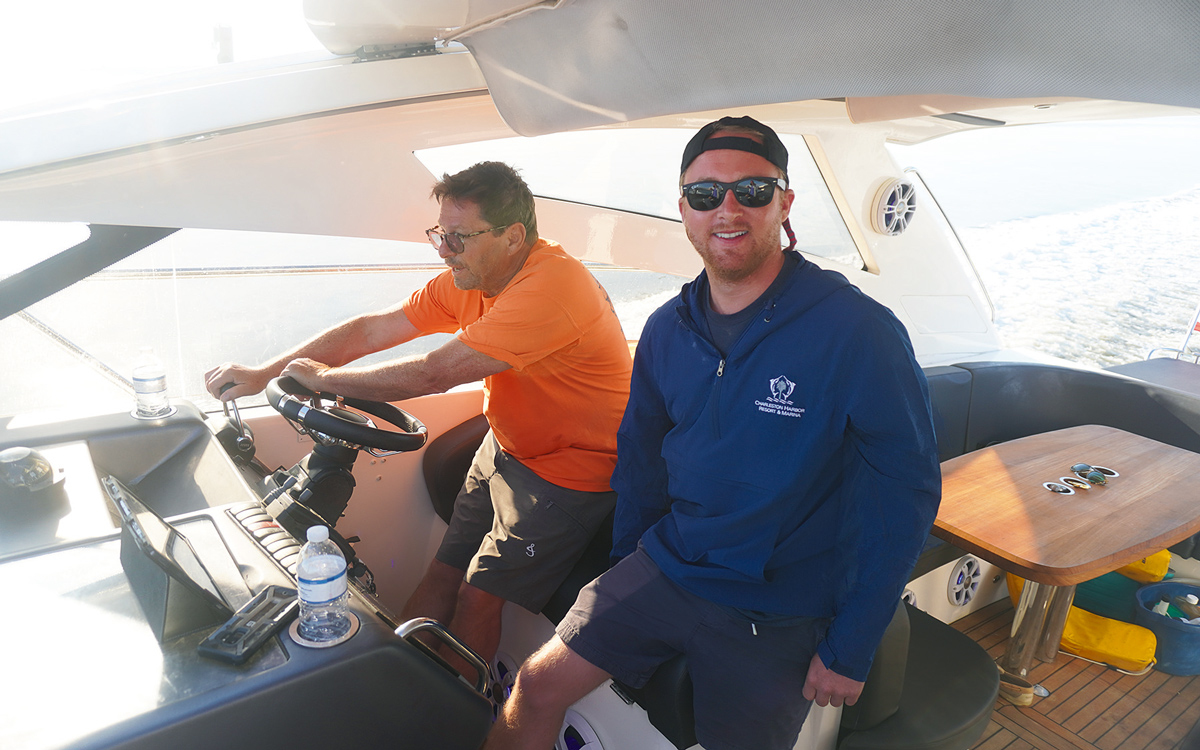 Nothing seems awry, the fuel filters look clean and there is no sign of any leaks or failing joints. I conclude that a misreading fuel sensor is the most likely cause. In port it would be a 5-minute replacement using a spare I already have stowed away on board but trying to fix it out here is not a sensible option. We press onwards, albeit slowly at 12.5 knots. With 40 sea miles still to go, our passage time will take a lot longer, especially with the gulf stream current on our nose.

Over the next five hours the wind steadily increases to almost 30 knots kicking up a 4ft swell that tosses us about like a cork. With no autopilot to take the strain (it is malfunctioning too), we take 60-minute watches at the helm steering by hand. After what seems like an age, we finally turn due west into the Charleston Harbor inlet and limp down the 3-mile channel into port.

A radio call to Charleston Harbor Resort and Marina secures us a slip on the outer wall with fabulous views of Patriots Point, the USS Yorktown and across the river to old Charleston. But first we have to negotiate a 30mph cross wind blowing us onto the pontoon past a 60ft flybridge with its bow protruding. 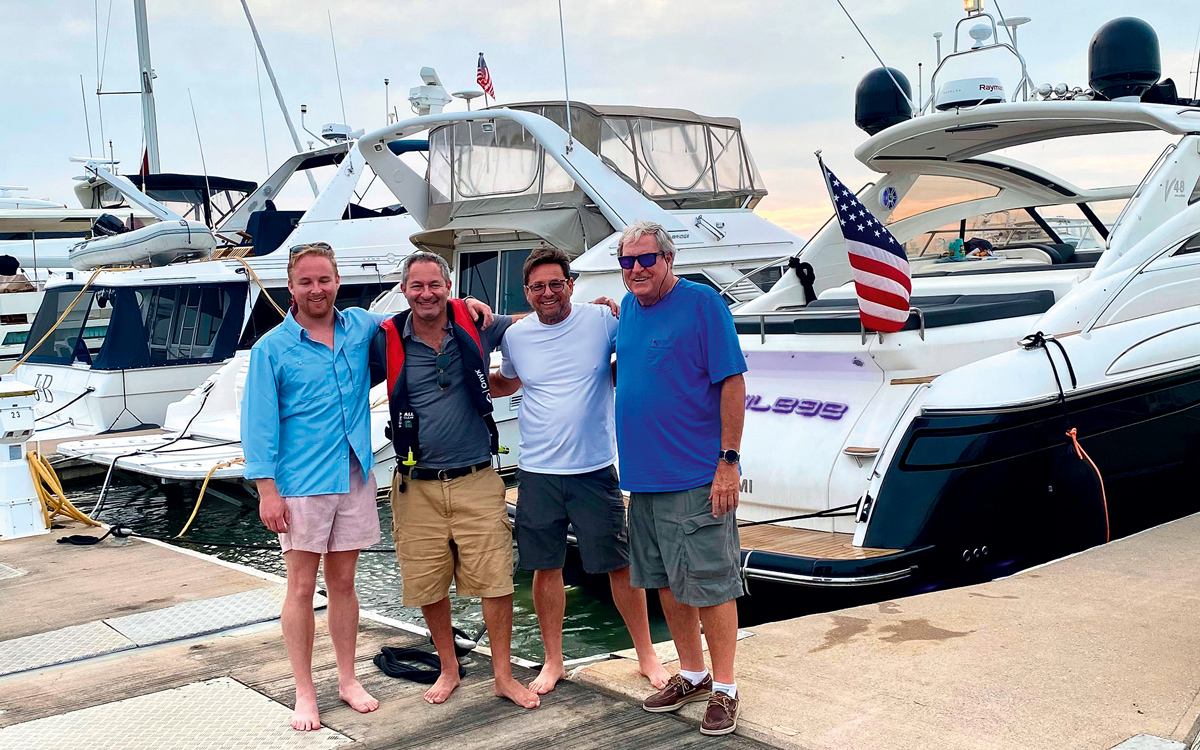 The crew celebrate their safe arrival in Charleston

In these conditions a sickly engine is far from ideal. My only option is a stern-in approach into the wind and lots of power. Thankfully with four skilled crew members onboard, we complete the manoeuvre unscathed and our dignity intact. Once secure, we are treated to one of the most breathtaking sunsets I have ever witnessed as it slowly sinks behind the massive aircraft carrier turned museum, the USS Yorktown.

Charleston is truly a wonderful city, with beautifully maintained buildings and an ambiance befitting its heritage. It also offers some of the best dining the east coast has to offer. The following morning, as promised, all three engineers turn up to sort out our various issues.

The guest cabin toilet, which has refused to draw water for the last two days, turns out to be nothing more than a closed seacock, which one of the crew mistakenly shut off during a bilge inspection. The wandering autopilot continues to baffle the electronics’ specialist but we can live with that. The engines, however, need proper attention.

The low fuel pressure is being caused by a blockage in the fuel line between the primary and secondary filters, requiring it to be removed, blown through and replaced along with two new fuel filters. The air filters also needed changing as the old ones are full of black soot from the leak. The T-clamp needed to plug the leak proves harder to find but we track one down in Annapolis and arrange overnight shipping to Charleston. By mid-afternoon I am finally able to relax with the rest of the crew at the resort’s pool.

For the remaining two days of our visit, we make the most of what Charleston has to offer, including a fascinating tour of the USS Yorktown and the historic old town with its beautiful but often sad reminders of America’s struggles through the 19th century.

Highlights include smoking a Cuban cigar in an Airstream caravan converted to a cigar lounge, an epic meal of Kobe beef fillet with truffled mash and a cocktail bar serving the best Manhattans I’ve ever had. 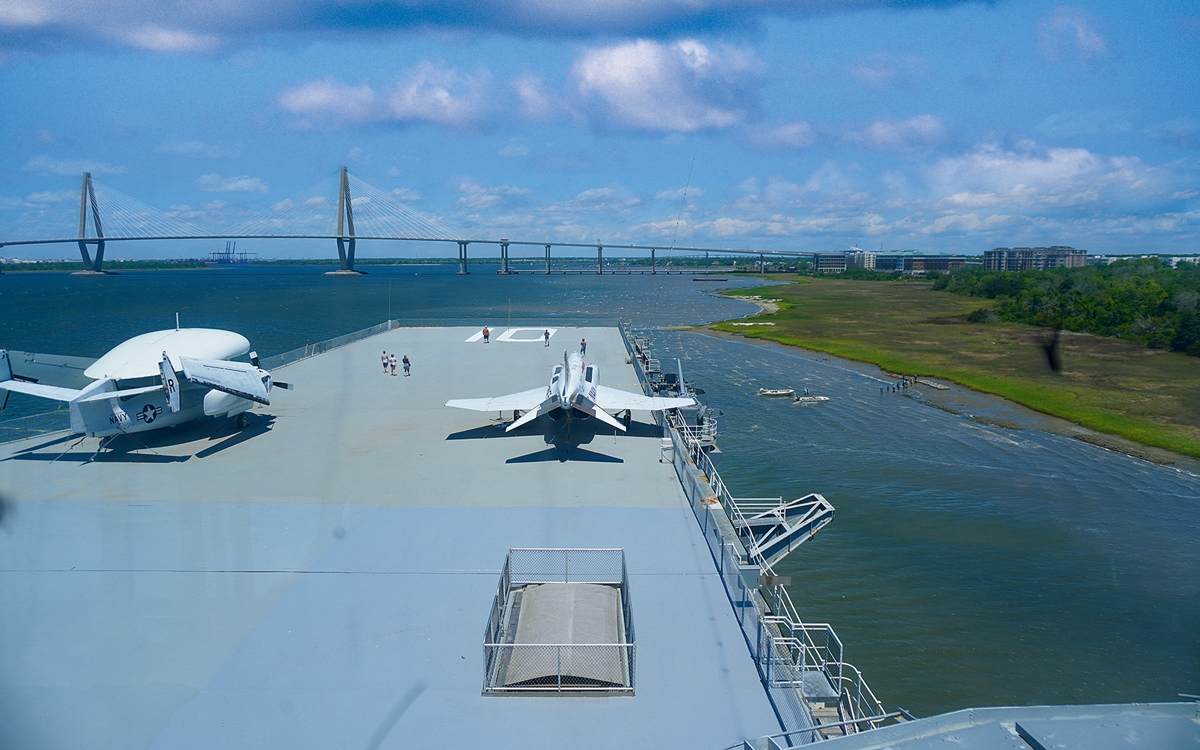 On the flight deck of USS Yorktown in Patriots Point, Charleston

However, this is a boat trip not a sabbatical and another crew member is due to join us in Norfolk VA. So before we know it we are back on board for the next leg, a three-day passage taking us past Cape Fear and inside Cape Hatteras to Norfolk, Virginia. This will be the most dangerous section of our journey as Cape Hatteras is where the Atlantic Gulf stream and Labrador current meet, stirring up intense and unpredictable weather.

It’s reputation as The Graveyard of the Atlantic is well deserved. Over 600 ships have perished here in the past 400 years and the local lifeboat and coast guard services are some of the busiest in the US. A careful weather watch and regular crew briefings will be essential. With over 400nm to cover and a weather window of three days before things turn nasty, we need to get a move on.

An early 6.30am start sees us departing Charleston. Our original route would have taken us on a direct ocean route to Cape Fear. However, we decide to reroute back into Winya Bay to pick up a safer intra-coastal passage for the rest of the journey, cutting our ocean passage from 140nm to 50nm or so. 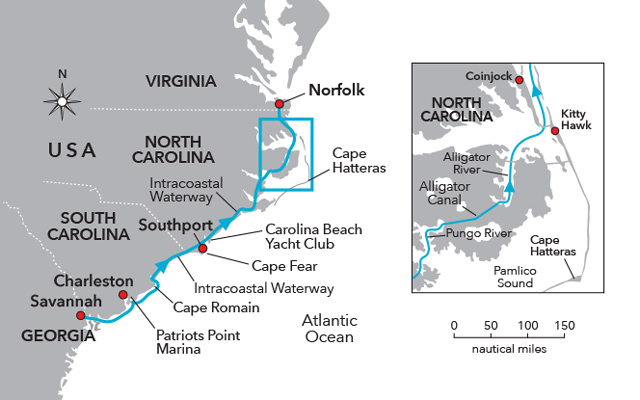 With wind and sea state forecast to build throughout the day it feels the wiser choice, especially given the risk of further engine issues. The only other navigation concern is a notorious reef 5nm east- south-east of Cape Romaine that could tear us to pieces.

Most boaters taking on The Great Loop do so in sturdy trawler yachts and take months not weeks to cover the distance at displacement speed, taking the intracoastal route wherever possible. Our aim is to knock off the miles in a more speedy fashion using…

Read More:Cruising the Great Loop: From Savannah to Norfolk in a Princess V48