The Leaver family fulfill a lifelong ambition to cruise the Isles of Scilly in their 18m Dutch steel motoryacht, Duchess.

Regular readers may remember my previous story about buying Duchess, a 59ft Van der Valk steel motor yacht, as a floating second home in Chichester Harbour as well a means of satisfying our thirst for cruising adventures further afield.

In 2018 we ventured to the Channel Islands and the West Country. In 2019 it was northern Brittany. For 2020, after many years dreaming about it and bearing in mind the difficulties of travelling overseas during the pandemic, our goal was to make it to the Isles of Scilly.

I had been loosely planning a cruise there for a couple of years and this seemed the perfect opportunity. After the strict measures of the first lockdown, it was a relief to see the harbours in the West Country opening up to visiting yachtsmen in early July and the pubs and restaurants we were hoping to visit also sparking into life.

Being 30 miles to the west of Land’s End, a trip to the Isles of Scilly usually comes with a certain degree of trepidation for many boat owners. Quite right too. To get there and back safely you need the right weather conditions for the passage. And in an ideal world you also need a good weather window in order to enjoy a carefree exploration of this remote archipelago.

I had read many reports of boat owners getting to Falmouth, not having the right weather window and having to postpone the trip to another time.

To avoid this situation I booked three weeks off work. This would still give us enough time to cruise around Falmouth if we had to, a good week in the Isles of Scilly and time to get back to Chichester. To further improve our chances we arranged for our part-time skipper, Mark, to move Duchess to Port Pendennis in Falmouth for us in the first week of August. 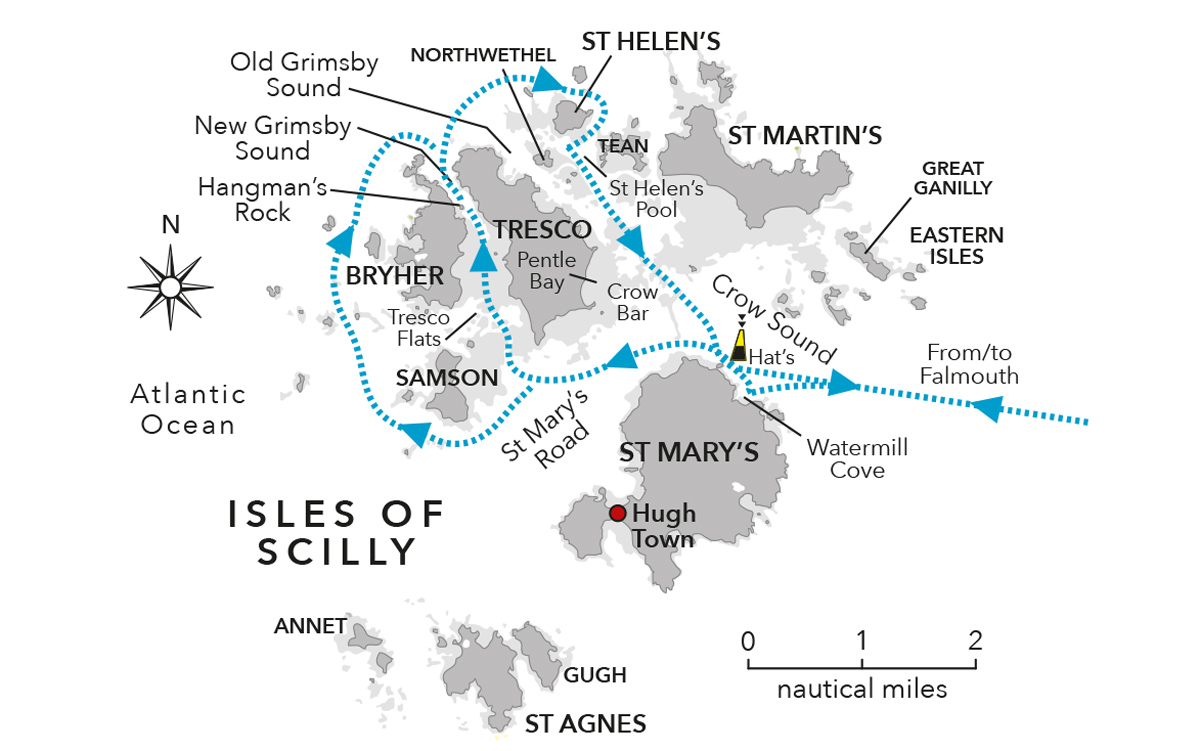 We then took the five-hour train journey from Surrey a few days later to join him. Mark had the best week of weather for the whole trip and his delivery was characterised by a massive area of high pressure sitting over the UK, so zero wind and flat seas.

By the time we arrived in Falmouth our weather window was still there but with a big low developing in the Atlantic and strong wind forecast for five days’ time.

Within an hour of getting off the train at Falmouth Docks we had cast off and moved to anchor in the Helford river with a plan to make a first-light getaway to catch the favourable westerly tide round The Lizard the following morning. 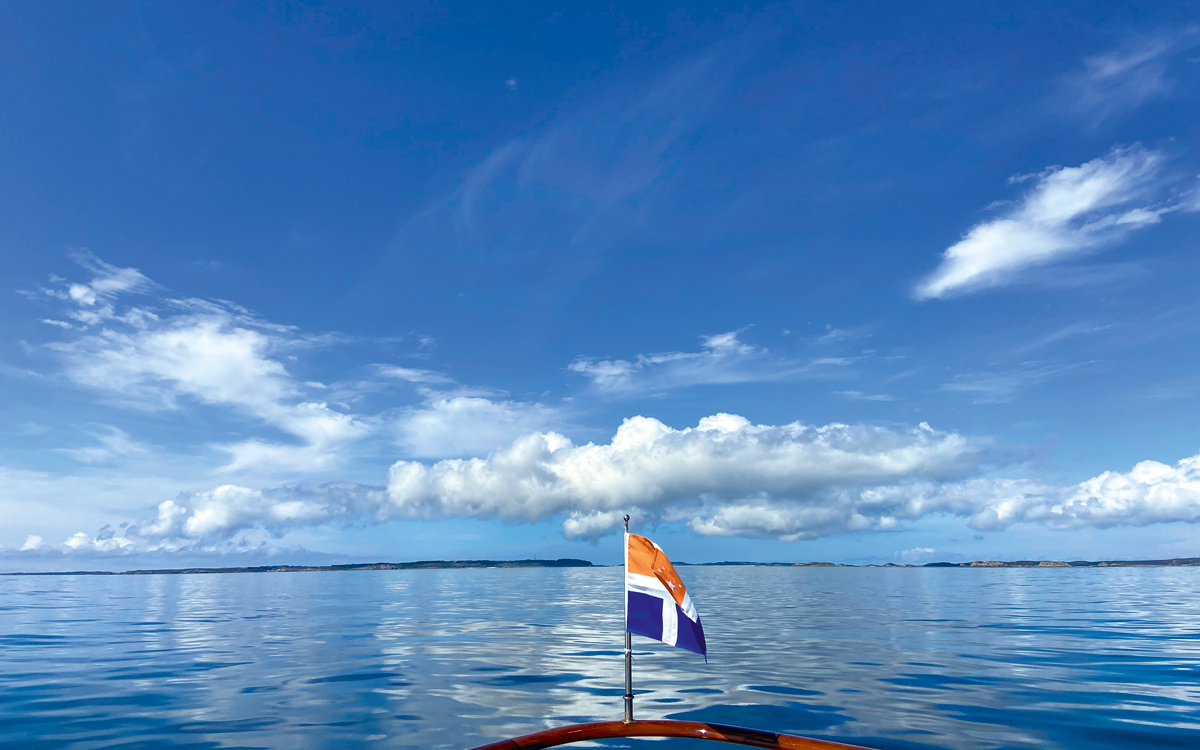 On Duchess we generally cruise at 8 knots boat speed so having a favourable tide is an important consideration for us. With this in mind, we reckoned our 60nm passage from Helford to the Isles of Scilly would take us about seven hours.

We weighed anchor at 0600 the following morning and were rounding The Lizard by 0745 with the tide helping us along. There was no wind and the sea on our passage was like glass.

The only roll came from a passing container ship en-route to Liverpool which knocked over my hotel on the Monopoly board! 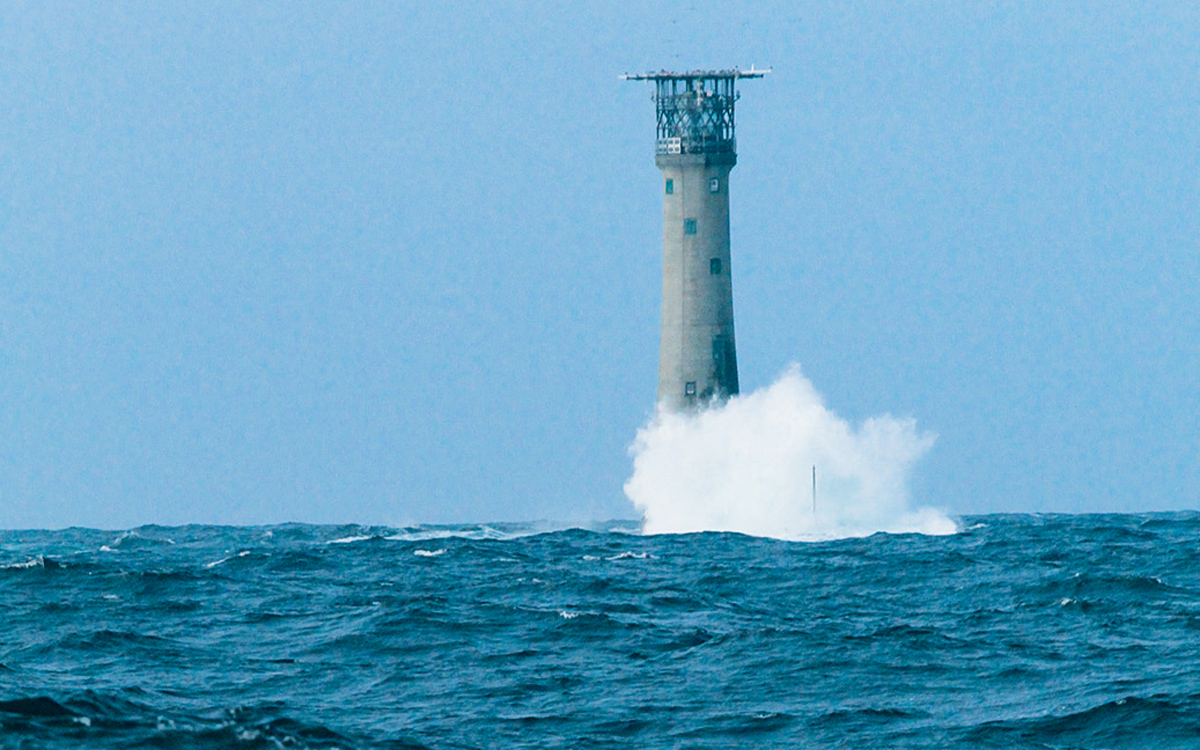 The vague outline of the archipelago emerged from the haze shortly after passing south of Wolf Rock, a useful reference on the rhum line from The Lizard. Because the weather was fine and we were arriving close to high water we made our approach via Crow Sound, passing between St Mary’s and St Martin’s, to the south of Hats Cardinal and Crow Bar.

Keeping a close eye on the chart and around us for marked and unmarked rocks we eased our way to St Mary’s Road where we then headed north over the Tresco Flats.

We had been warmly welcomed and guided in by great friends on their small powercat and by 1330 we had dropped anchor in New Grimsby Sound between Tresco and Bryher. We enjoyed a well-deserved lunch and glass of rosé while we soaked up the sunshine and our new surroundings watching the comings and goings on the Tresco side. 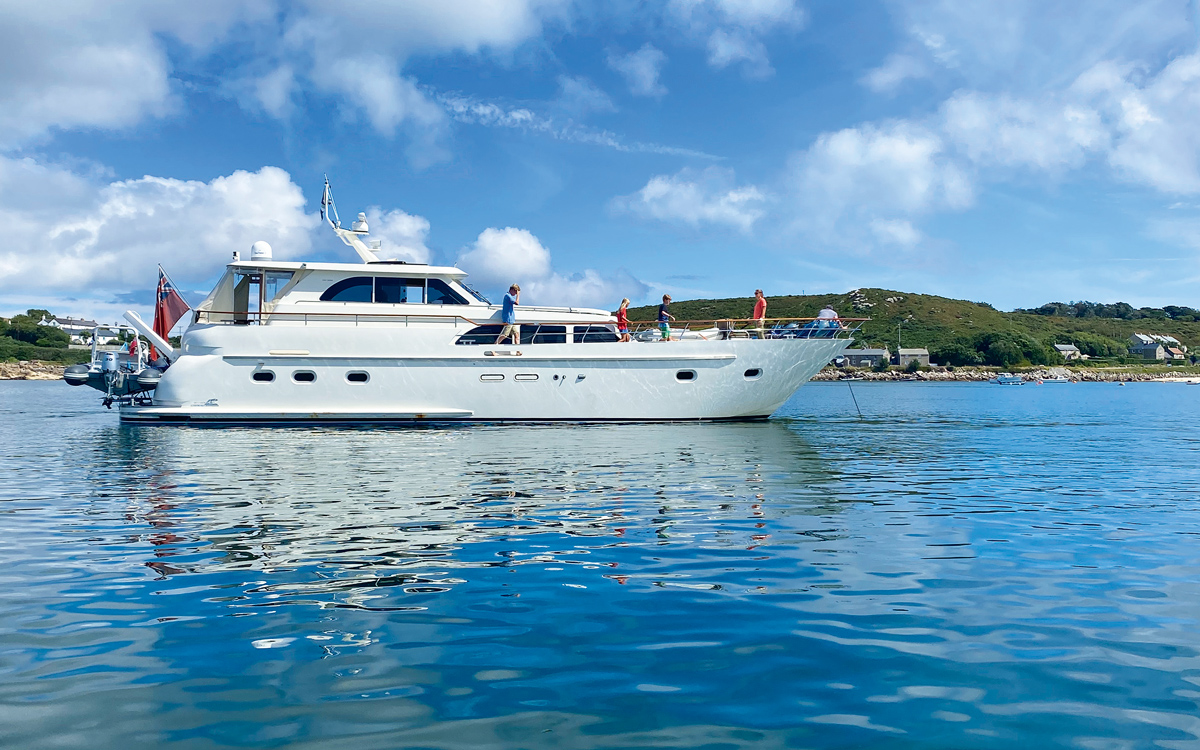 It was a lovely scene with at least 20 visiting boats either at anchor or on one of the plentiful visitors moorings and the various ferries coming and going with day-trippers from other islands.

We stepped ashore for a short walk across Tresco to Old Grimsby where we found ice creams at the Ruin Café. Carrying on around the northern end of the island brought us back to the boat via Cromwell’s Castle before evening swimming and paddle boarding in the bracing but crystal-clear water.

We dined ashore with our friends at their timeshare next to the old Flying Boat Club looking out to Duchess at anchor silhouetted by a fiery red sunset. 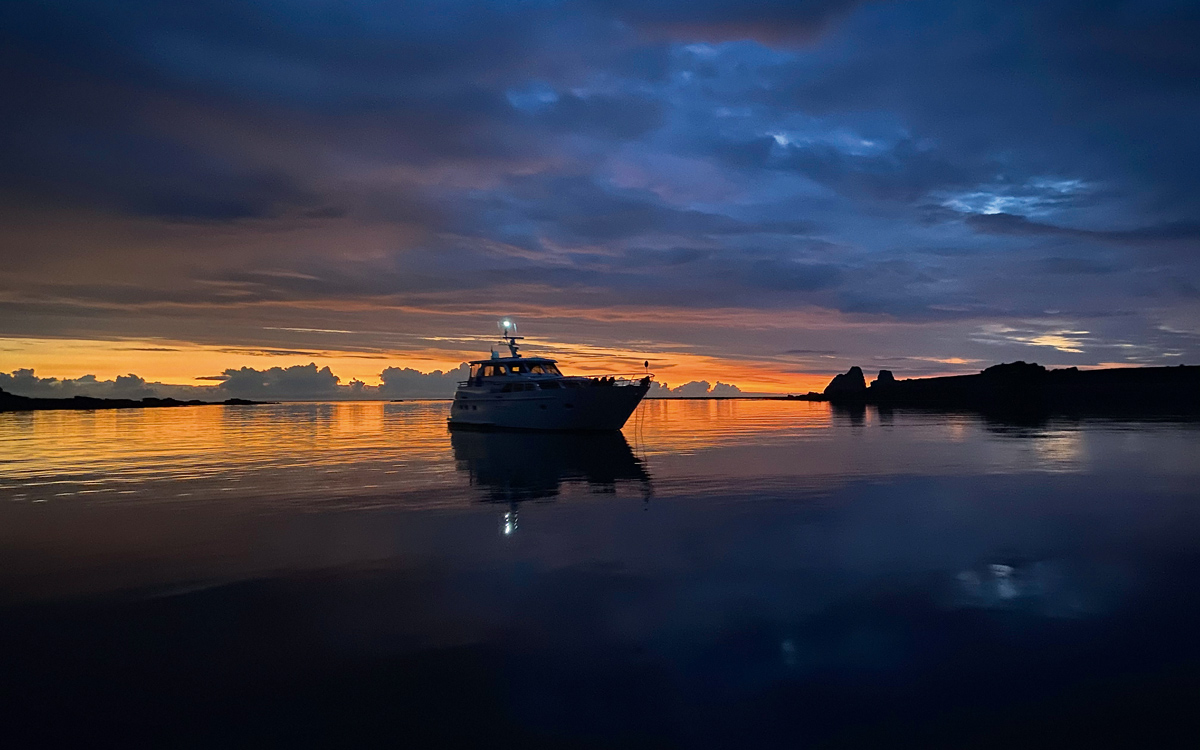 Conscious of the weather forecast, now predicting a storm with 40+ knots from the south west and a six-metre swell which would arrive in about three days time, we set about exploring the islands. We had the thought in the back of our minds that we may have to make a run back to the mainland in a couple of days before the storm hit.

Having taken a lovely walk around Bryher in the morning and bought prints in a little artist’s studio in a remote shack, we moved Duchess to St Helen’s Pool, which is another well protected anchorage from most directions.

It is bounded by the smaller islands of St Helen’s, Northwethel and Tean but is also convenient for tender excursions to the Old Grimsby side of Tresco and St Martin’s. From here the children were also able to water-ski and donut in the nearby flat water of Pentle Bay on the east side of Tresco while Mark went fishing for mackerel and returned with a generous catch of pollock! 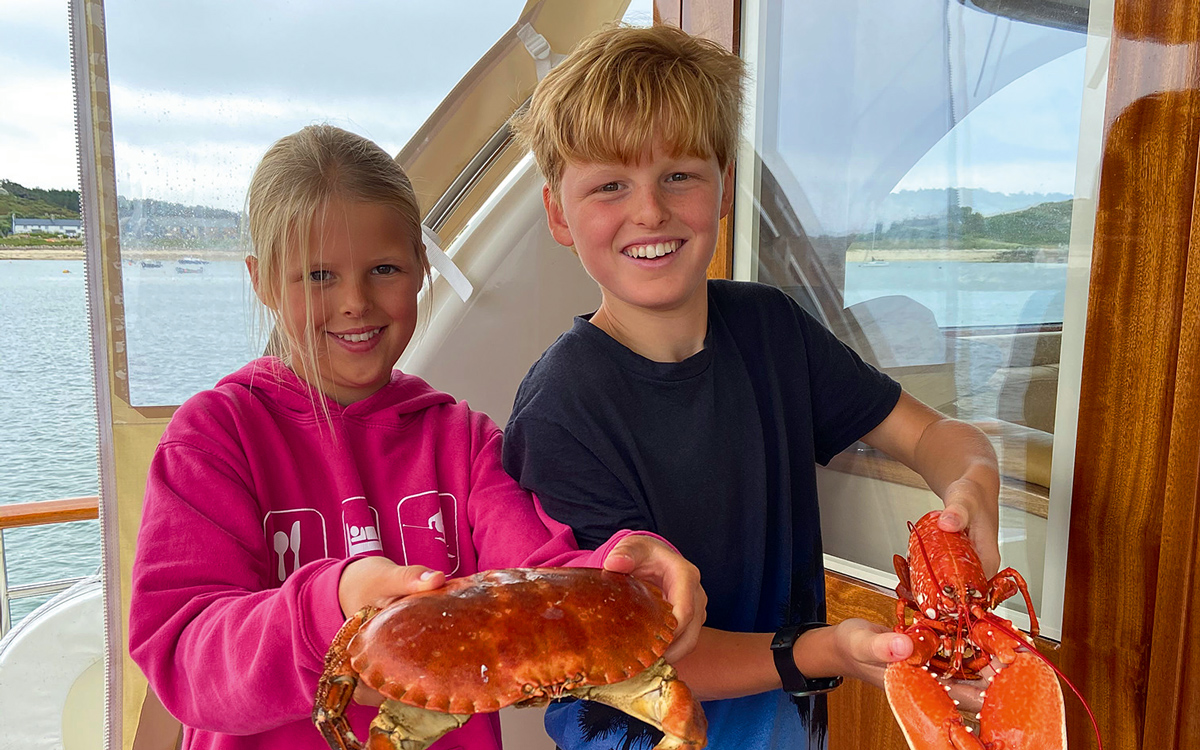 In the evening we tendered ashore to Lower Town quay at St Martin’s for a simple pub supper at The Seven Stones Inn where we sat outside and they kindly obliged with an umbrella to shelter us from the drizzle, which set in just after we had ordered. The settled weather was starting to turn on us.

This was our first “eat out to help out” meal!

A lazy start meant that my alarm was the sound of Mark and the children returning in the tender from mackerel fishing with yet more pollock. On the way back from the pub the night before I had spotted a boat in the anchorage which I thought I recognised. 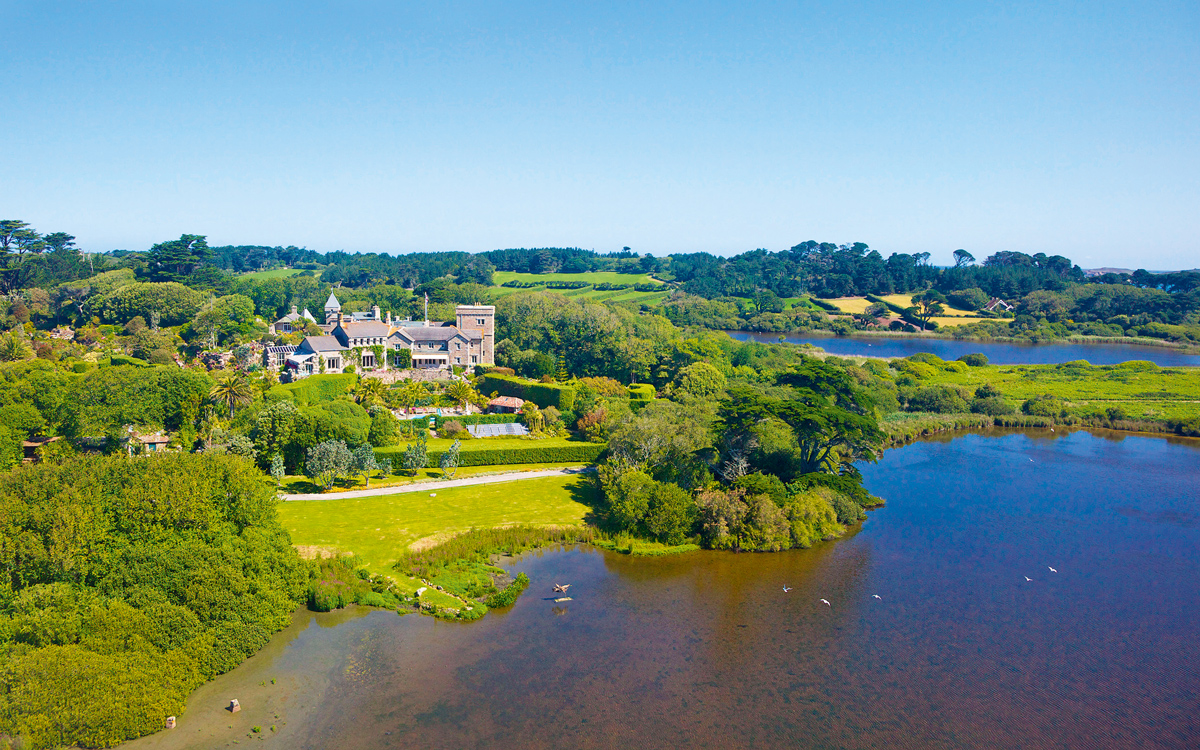 The idyllic setting and grounds of Tresco Abbey. Photo: Alamy

Leafing through a back copy of MBY I had used to plan our voyage, I realised it was Thea, owned by MBY contributors Tom and Lorraine Owen. They had written in detail about building their own 9m motor boat and subsequent cruising experiences on the Isles of Scilly. I paid them a visit and we discussed viable anchorage options to ride out the storm.

In reality there were only two really good options as we were approaching spring tides and, as seasoned Scillonians, Tom and Lorraine’s advice was invaluable. We now felt confident about staying longer in comfort and safety.

The day was spent ashore on Tresco visiting the beautiful Tresco Abbey gardens and the fascinating Valhalla museum. The museum features figureheads and artefacts from more than 30 famous merchant sailing vessels and early steamships wrecked off the islands, a chilling reminder how the islands caught out earlier seafarers before we all got chartplotters! 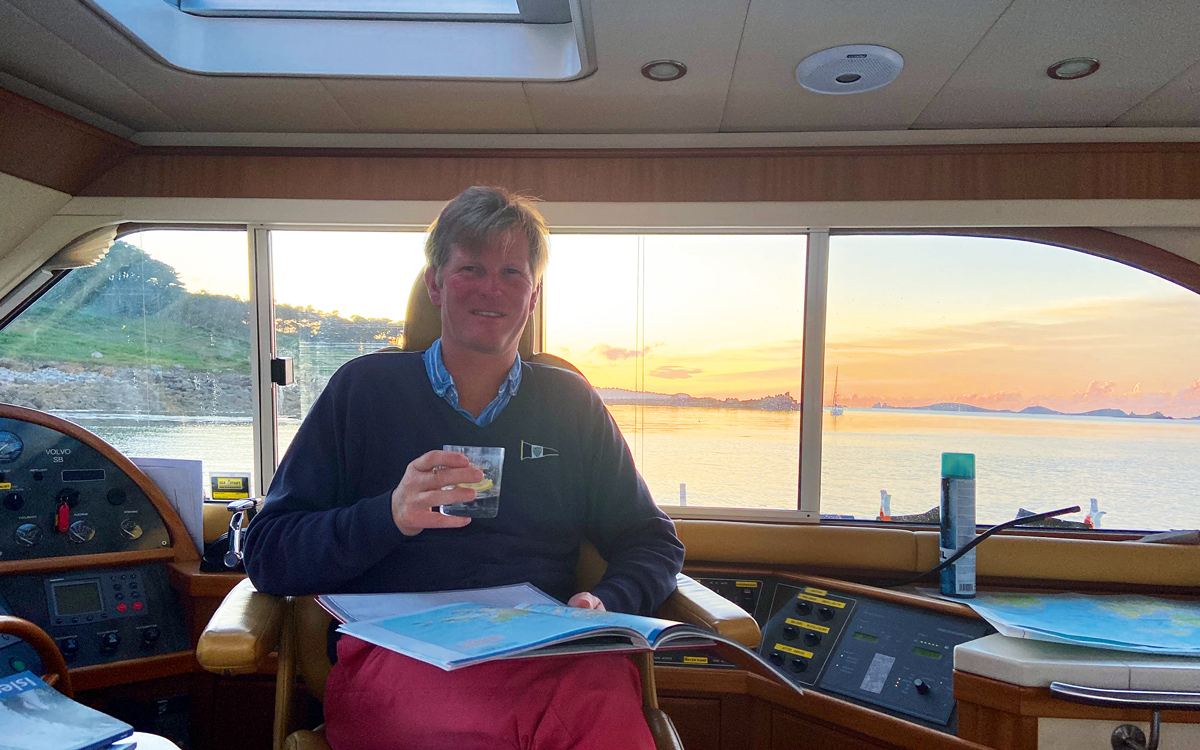 We provisioned at the very well-stocked Tresco Stores before returning to Duchess to move her at high tide to Watermill Cove on the north-east coast of St Mary’s. From here we made a quick blast in the tender to Great Ganilly to swim with the seals.

The best words to describe the experience are freezing and amazing; being face to face with a curious bull seal is something I will not forget in a hurry! Hot showers and the barbecued pollock back on Duchess rounded off a wonderful day.