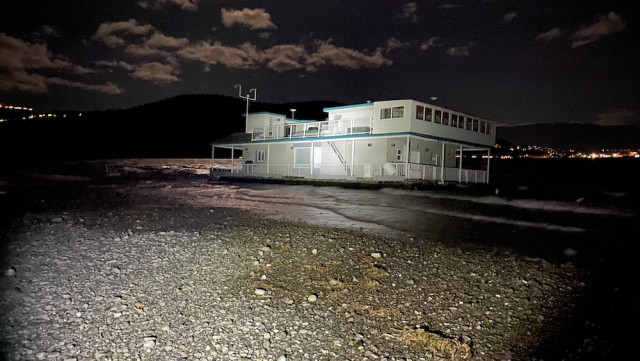 Houseboat aground at night near Bear Creek Campground

Traders Cove residents on the west side of Okanagan Lake are growing ever more concerned about a houseboat that has washed ashore just south of Bear Creek Campground.

The houseboat appears to have broken free of its moorings after Monday’s wind storm and has since become beached on the rocks.

Several concerned citizens have reached out to Castanet to share their worries that the boat is listing and appears to be in jeopardy of breaking apart.

“It’s washed right up onshore and it’s starting to get a bit of a lean to it,” Melanie Walsh tells Castanet.

“Honestly my concern is if it were to sink how will they go about getting it out of there? I know it’s full of appliances with Freon and different things. I’m like, ‘oh my that’s no good.'”

Walsh is also concerned about Bear Creek Campground, “if it were to get beat apart over the winter the public campground is just around the corner and it will be filled with families and kids at the beach.”

This is not the first time this houseboat has had issues. It was taking on water and sinking back in 2020. At that time the owner Ted Doucette told Castanet he no longer lives on the vessel full time, but he says he’s had it on the lake for the last 15 years.

Walsh says she doesn’t know the owner personally but has heard through other area residents that it has been for sale in the past. She has no idea if the owner is even aware that the boat has run aground.

“It would be nice if they would come down and look at it,” Walsh says.

Castanet has reached out to the federal government, which has jurisdiction over waterways.

Under Canadian law, vessel owners must take measures to prevent, mitigate or eliminate hazards presented by their vessel and are responsible for all costs associated with their vessel, including salvage.

The Gellatly Bay Goats Peak Community Association is rallying to stop a large 250-unit development on Gellatly Road across from Willow Beach.

Plans sent to the City of West Kelowna in the summer propose a development including two 10-storey buildings and one eight-storey structure on what is presently a boat storage yard.

The developer is asking to amend both the land use designation and zoning to accommodate up to 250 residential units, 10 live/work units and seven commercial spaces.

The development proposes to provide parking for up to 250 vehicles with separate visitor and public parking for boats and trailers.

An online petition has been set up to gather further support.

They claim the 39 metre height contradicts the current Official Community Plan and ignores public feedback around the new OCP.

“The City of West Kelowna is not experienced with buildings over six storeys, and given the limited real estate available at our irreplaceable waterfront, there is grave concern using this site as a ‘test’ location,” the petition states.

The community association has concerns over safety and access via Flying Horse and Angus drives, both existing residential access roads.

They say the height of the buildings, while designed to step back to each storey, will conflict, rather than harmonize with the existing neighbourhood which consists of low-rise and single family developments.

“It will reduce access to our beaches by making an already popular location less accessible to residents and visitors alike, will likely have a detrimental late afternoon shadowing effect on Willow Beach and the Gellatly recreational corridor, and negatively impact the view of existing residences in surrounding neighbourhoods.”

The application has not yet come before city council. The developer of the project is not yet known. 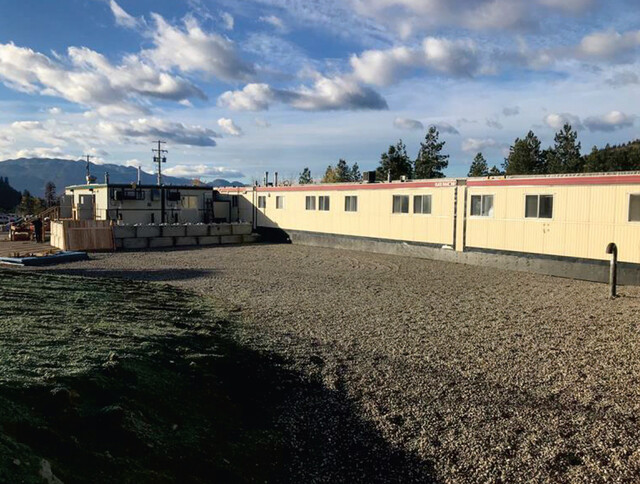 A new temporary shelter adjacent to a gravel pit on Bartley Road is expected to open this week.

Turning Points Collaborative Society which also runs the temporary shelter at the nearby Super 8 Motel, have been hired by BC Housing to operate the facility.

It will be staffed around the clock.

Based on its current temporary use permit, the shelter will operate at this location for up to three years.

In a presentation for Tuesday’s council committee of the whole meeting, officials with BC Housing say the shelter is designed for people with a history of homelessness or are at risk of homelessness and are current guests at the Churchill Road shelter.

Priority will be given to Westside residents. 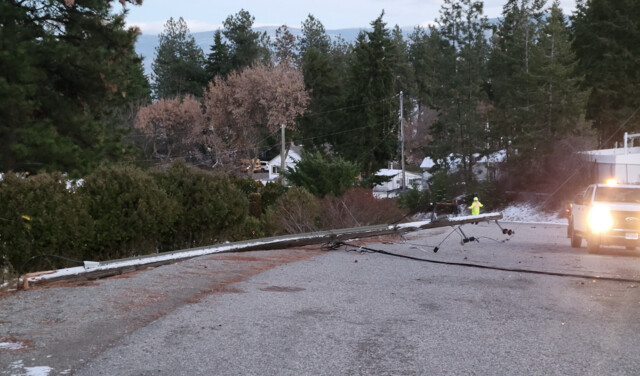 A West Kelowna resident in Glenrosa is concerned after a downed power line blocked access to and from her neighbourhood since yesterday evening.

The woman, who wishes to remain anonymous, lives in one of roughly 40 homes at the end of Mciver Road in the Glen Eagles Drive area. She and her neighbours haven’t had power since Monday afternoon, but as she tells Castanet, it’s not the power she’s concerned about.

“I don’t care if the power doesn’t come on until 11 at night, it’s the access I need,” she said. “If there’s an emergency, people need to be able to get in and out.”

A roadblock has been set up preventing access to the neighbourhood.

After Castanet contacted BC Hydro, they said a crew had just arrived to clear the road at about 5 p.m.

“They have to replace a broken pole and clean up the downed wire that was taken down by a tree. We’re expecting power to be restored late tonight around 10 p.m.,” said BC Hydro spokesperson Mary Anne Coules.

Coules also said anyone in the area should be able to leave their homes as crews are clearing the blockage.

BC Hydro still has a number of calls to respond to in regards to downed power lines, but as Coules tells Castanet, there is a process when it comes to restoring power.

“So generally we’ll restore power to larger neighbourhoods first, and then move to smaller pockets, but the reality is we’ve had to restore power for close to a quarter-million customers since Monday, so we’ve got all hands on deck,” explains Coules.

BC Hydro runs through a priority list when restoring power. First, they start with safety calls, then, their second priority is high voltage transmission lines. The third priority is places such as hospitals and critical infrastructure, next is police and fire calls, then multiple outages by geographic area and size, and lastly smaller neighbourhoods. 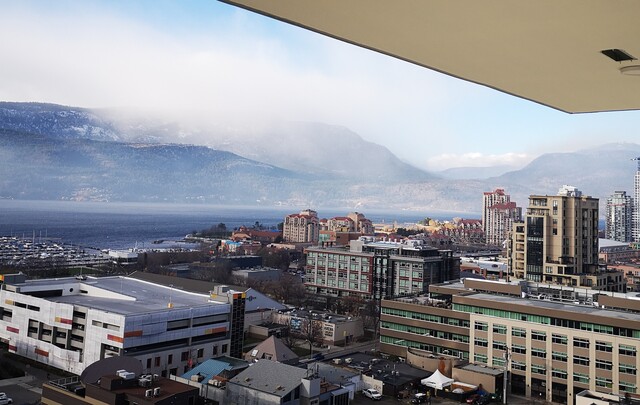 Smoke in the hills above West Kelowna is due to a controlled burn.

Tuesday was a burning day, he added.

Castanet News received multiple inquiries and photos over the course of the day from curious residents. Some have also reported a smell of wood smoke.

Clean up from Monday’s thunderstorm is underway for residents across the Central Okanagan.

The storm caused wide-spread power outages as power lines were impacted by wind gusts that reached over 100 kilometres an hour in some areas, according to Environment Canada.

West Kelowna resident Stephen Bryans is just feeling fortunate he wasn’t home when a tree crashed through his house, sending branches into his bedroom window while he was running errands.

“I came around the corner, and there were a lot of roads blocked off and I knew there had been a storm, but in my wildest imagination I had no idea that I would have these two huge trees uprooted and one across my house,” Bryans described.

Bryans told Castanet the damage to his home is extensive, as the storm left holes in his home’s roof from branches puncturing through several of the rooms upstairs. He said he’s never seen a storm like this so late in the year.

“No, I haven’t. I’ve seen a lot of wind storms, and these two old trees were the last…