How to sail away without quitting your life: advice from a couple who’ve done it. Patrick and Sheila Dixon explain how to make ‘hybrid cruising’ work

Seven years ago, as a pair of empty-nesters living in London, Sheila and I embarked on an impulsive sailing adventure. I was working at a frenetic pace, flying all over the world advising global corporations on future trends. Meanwhile Sheila was running our company, working as a magistrate, and holding everything else together.

We were looking to slow down a bit, and also to develop new skills, reinvent our future and rejuvenate ourselves. But we were worried about damaging the business, neglecting family, wrecking our bank balance and risking a host of other things. Could we make it work by spending a third of each year aboard, as ‘hybrid sailors’?

It was a huge step to buy our own yacht after chartering a few times. “I thought Patrick was mad at first,” Sheila admits, “but in the end I was the keenest on the whole idea. My father owned yachts but by 70 was unsteady at sea and losing his nerve.”

Sheila’s mother had memory loss by 69, while my father died of cancer at the same age. My early years as a hospice doctor had also shown us both that life is far too short to waste a single day doing things you don’t believe in – or don’t actually need to do. We both believe in seizing the day: when life is uncertain, ‘eat dessert first’! 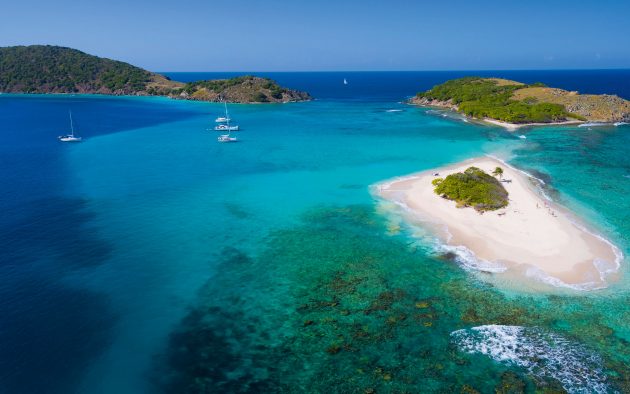 When we made the decision to buy Moxie (then berthed in Lagos, Portugal) we initially assumed we’d bring her back to the UK. But the lure of sunshine, warm seas and the fascination of the many countries along the Mediterranean coast persuaded us to sail east instead.

We flew out to Lagos several times in the three months before setting off. It was a very busy period, equipping Moxie and getting her ready, but ‘normal life’ continued: the day to day running of our company, client calls, lecture bookings, relentless answering emails and, for myself, travelling to speaking events, wherever in the world they might be.

Do you really need to stop work or take months off to make a transatlantic crossing? What if you can’t… 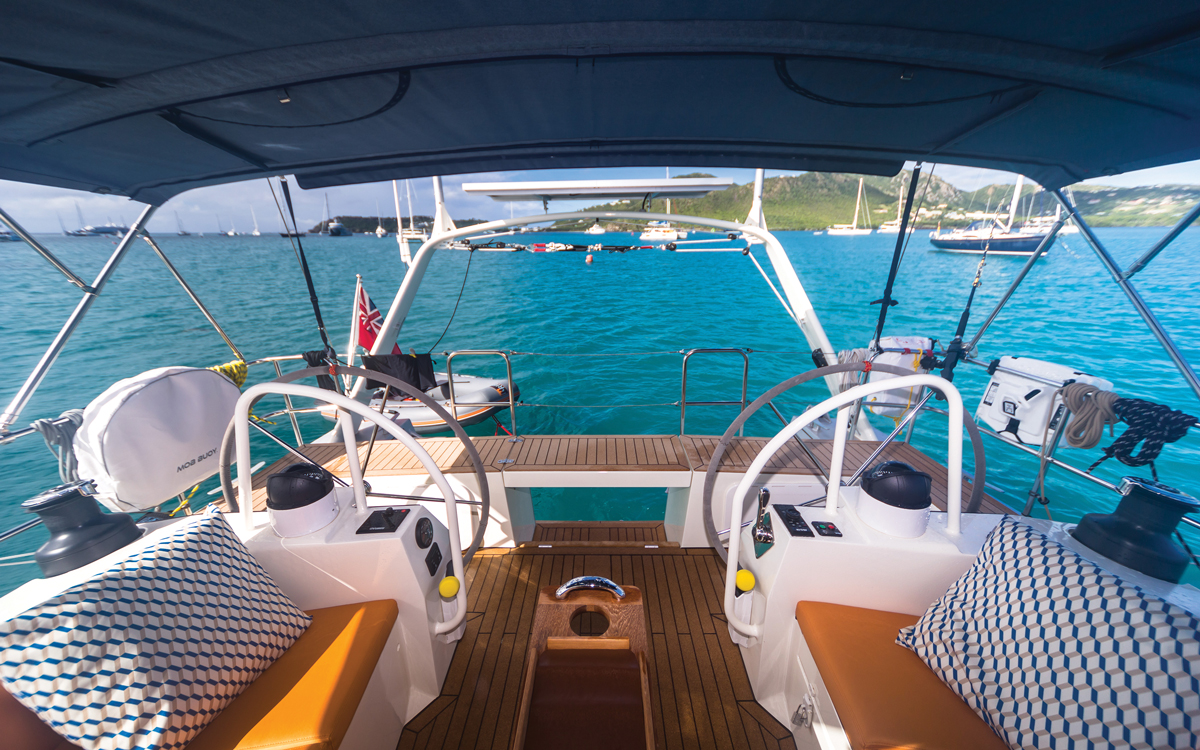 Our own time has a value to the business, so we found it best to focus on our clients, and let boat experts do much of the yacht preparation.

We bought Moxie as a 10-year-old 47ft yacht, kitted out for offshore sailing, for the price of a large motorhome. Five million people in the UK own second homes – but you can buy a boat for a fraction of that, and there are bank loans or finance options. Depreciation is low if you go for a well-built older model and keep it in good order.

To fund day to day living costs we diverted holiday spending into our adventure, and made savings on domestic bills such as energy and petrol. Anchoring usually costs nothing, and many ports in places like Greece offer very low rates for yacht owners out of season – though hybrid sailing can rack up big marina bills if you fly home in summer.

We also moved out of London to buy a guesthouse on the sea front of Weymouth, which we now let out to large groups on AirBnB – but only when we are afloat, so AirBnB now covers most boat bills. 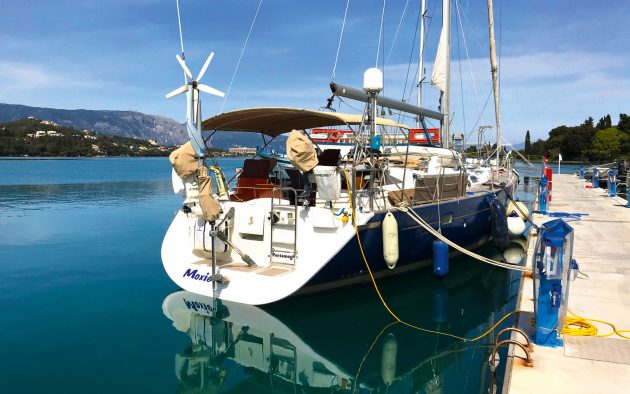 Moxie has ended up paying for herself several times over. Living aboard soon refreshed our thinking and led to us trying new initiatives. Despite previously having had 16 books published, I’d experienced a decade of writers’ block. But within three months of beginning our new lifestyle, I had a contract for The Future of Almost Everything, and Salt in the Blood followed on.

Along the way we’ve met all kinds of liveaboards, some with creative ways to finance their maritime adventures. We met a wonderful Australian couple in their 80s who regularly fly to Europe, buy 20-year-old boats and sail them to Australia.

They sell on arrival for up to £20,000 more than the purchase price (as good quality yachts are in such high demand there), which finances it all.

However, few liveaboards cruisers are true hybrids. Most are retired, living aboard permanently except for trips to see family. Some are much younger on career breaks. Others are taking a couple of years to go round the world, home schooling as they sail.

Few are still fully integrated into ‘normal life’ back home. In our case, we set off in a timing window which we thought could close rapidly – our adult children were just married, we were aware our parents might need us more in future, and we were used to working virtually in the business.

Our ‘rule of thirds’ model has stood us in good stead, although we don’t divide every year up equally. “When we are in the Med we often fly out for a week or two, any time of year, usually at short notice and unsure of our return dates – and we can switch rapidly between sea or land mode,” explains Sheila. “But in places like the Caribbean it makes sense to be on board for at least a month each time.” 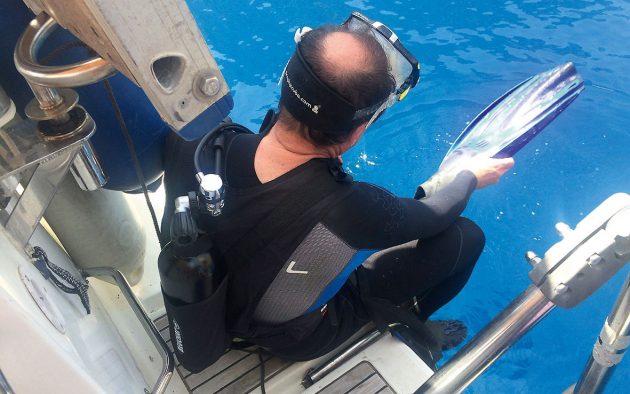 Be prepared to carry out your own maintenance

“It’s very unusual for us to be able to be afloat continuously for more than 6-8 weeks. When we are, it feels magical, but it can take a while to adjust back into land-based busyness.”

When we crossed the Atlantic in December 2019, we were completely cut off from the world for 16 life-changing days, unaware that a mutant virus was spreading from China.

As a futurist and physician I had warned many times about the possibility of new pandemics – and there may be more to come – but if you’re looking for a safe place to retreat, a tropical anchorage has to be high on the list.

We recently returned to Antigua, living on anchor for three months during a lockdown. We made our own water and power, and had a month’s food supplies as back up. I was delivering keynote speeches from our cabin, while Sheila was dispensing justice as a Magistrate, virtually chairing court hearings in Poole and Bournemouth.

We were surprised to discover that we often had faster bandwidth afloat in remote anchorages than at home in the UK.

Over the years, the costs of roaming have fallen dramatically with unlimited high-speed data packages now available across Europe. In the Caribbean our roaming contracts provided some service but not enough, so we bought a local SIM and wifi device, offering 150GB for £80.

In some ways, our liveaboard life is easier because of Covid, as long as you can navigate travel restrictions. When your colleagues or team are working virtually anyway, who cares if you are aboard or on land?

However, Covid has also made our hybrid lifestyle more difficult. Clients used to be happy with emails plus phone calls as points of contact between face-to-face meetings. But now they expect video, which massively drives up data use at anchor, and requires reliable bandwidth.

Before Covid, we used maybe 35GB a month, but now we may need 200GB. Zoom can use 1GB every hour. So if we both make three calls a day, that alone could mean 30GB a week. 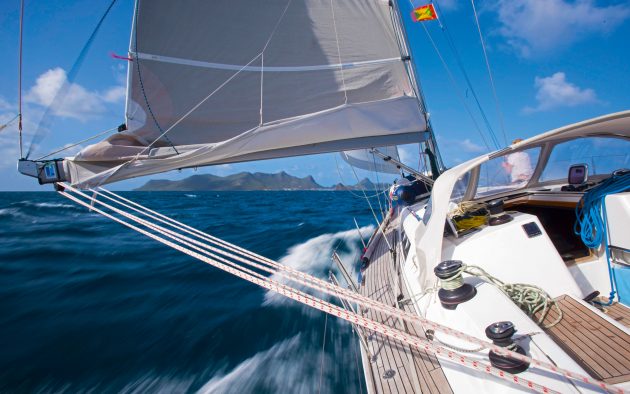 Union Island in the Grenadines. To combine working and sailing in the Caribbean you need to get away for at least a month. Photo: Rick Tomlinson

Lots of people made wild predictions during lockdown that few employees would go back to physical offices. I warned that this was nonsense at the time. Face to face meetings matter even more when we are physically scattered. It’s why Apple is among the companies that recently announced that all staff were expected to be in the office at least three days a week – they’d managed during lockdown, but realised they were unable to innovate.

So for most people with busy jobs they want to retain, sailing away for years at a time will remain a fantasy. But it is often possible to live the dream aboard for a third of the year, while maintaining successful careers. It takes planning – and flexibility.

We pick our wider destinations based on airport connections. Once under…

Read More:How this couple escaped the city to work from their yacht – Yachting World

As Portland’s Willamette River gets cleaner, it’s also getting overcrowded
Arrested at sea, adrift on land: Tamil Nadu fishers struggle with boats stuck in Sri Lanka
The 10 Best Places To Buy a Vacation Home in 2021
Volunteers in the sky watch over migrant rescues by sea
BFAR worries over continuing presence of foreign vessels in WPS