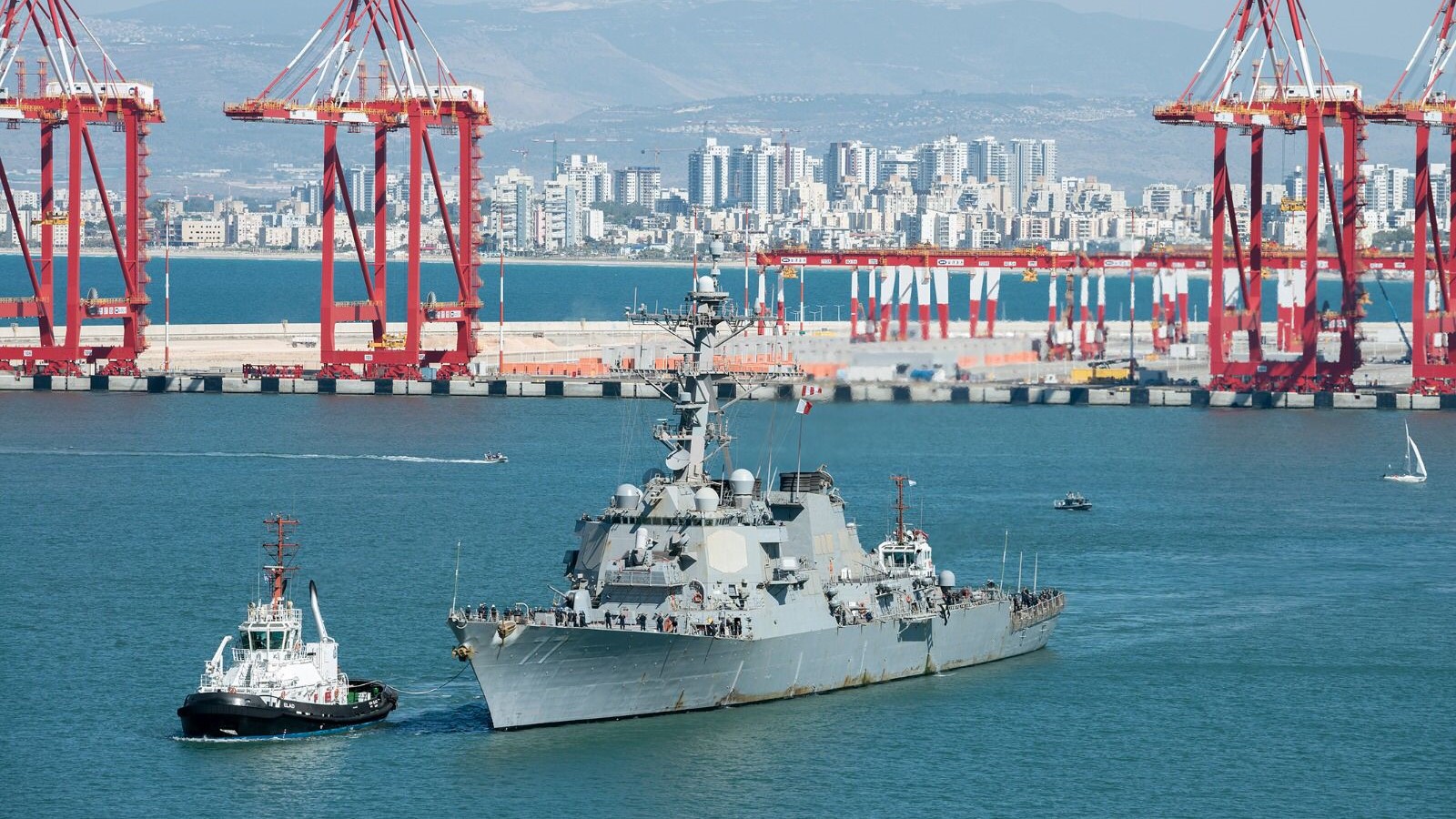 The USS O’Kane visits Israel in October. (Port of Haifa)

TEL AVIV: A visit last week to Israel by Vice Adm. Brad Cooper, the commander of US Fifth Fleet, included hammering out new details of operational cooperation between the US and Israeli navies operating in the region.

The focus of the meeting, military sources say, was a coordination effort around the evolving threats mainly posed by Iran in the Gulf and Red Sea. The two navies, the sources add, now have plans in place for joint action against Iranian threats — including how to counter Iranian use of manned and unmanned fast attack boats — but would not go into further details.

One Israeli source said that the meeting will result in immediate “open channels” between the US and Israeli naval forces in a way that will enable combined operations.

“This coordination has become an everyday requirement as things happen all the time,” said Ret. Maj. Gen. Amos Gilead, who served in many high-ranking positions in the Israeli defense forces (IDF), including head of the Military Intelligence Research Division.

The visit is part of the overall transfer of the responsibility for Israel from the US Europe Command (EUCOM) to US Central Command (CENTCOM). According to Rear. Adm. Daniel Hagari, head of Naval Operations in the Israel Navy, the move to CENTCOM “has a major influence over the activity of the Israel Navy and widens our scope of responsibility in the maritime domain.”

Coinciding with Cooper’s visit, the USS O’Kane was docked at the port of Haifa as part of the new bilateral cooperation between the Israeli Navy and Fifth Fleet.

Rear Adm. Daniel Hagari, Israel’s head of Naval Operations, said in a statement that the move to CENTCOM “has a major influence over the activity of the Israel Navy and widens our scope of responsibility in the maritime domain.”

A US Navy spokesman declined to comment on the specifics of the meeting beyond previously released public statements.

The Israeli Navy, in recent years, has received big chunks of the Israeli defense budget. This enabled it to acquire new German-made Saar 6 corvettes and Dolphin 2 advanced submarines, also made in Germany.

While the weapon suite on submarines are classified, some details of the systems now being installed on the Saar 6 corvettes have been released. The corvettes will carry a combined air defense system, comprised of the Barak-8 and the C-Dome, a naval version of the Iron Dome system.

“In some scenarios, both interceptors will be launched,” an Israeli military source said.

The Saar 6 corvettes are mainly built to protect the Israel EEZ that includes the huge gas reservoirs in the Mediterranean, which are assessed as being very high in the target bank of Hezbollah in Lebanon. But the recent developments in the Red Sea and the Gulf, including a July Iran-linked attack on a cargo ship, may bring these very advanced corvettes to these maritime arenas.

The Barak 8, produced by Israel Aerospace Industries (IAI), is designed for use against aircraft, helicopters, unmanned aircraft and sea-skimming missiles. It comes with a high-end phased array multi-mission radar, two-way data link, and flexible command and control system.

The company boasts of the “interconnectivity” among ships equipped with the system. Currently, the Barak-8 has an effective range of 43 miles, but IAI is developing an extended range version expected to give the missile a 93 mile range.

The C-Dome Naval defense system is made by Rafael, and like its land-based progenitor, is focused on saturation attacks with very short reaction times. It includes a multi-round launcher assembly loaded with vertically-launched canistered interceptors. The launcher is installed under the ship’s deck.

C-Dome utilizes the ship’s own surveillance radar and does not require a dedicated fire control radar. The company says that the interceptors are maintenance-free, and are stored in a sea-proof canister. Up to eight interceptors can be loaded into a modular Vertical Launcher Unit.