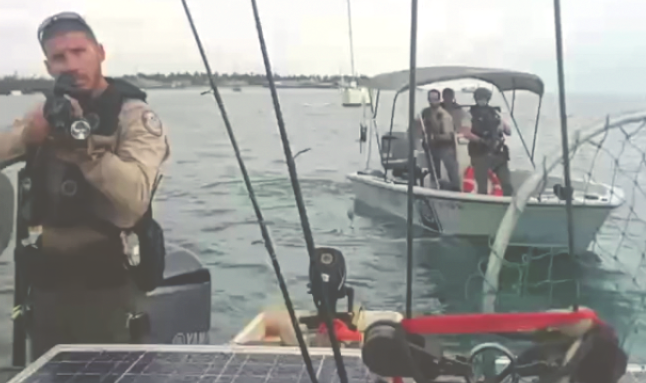 by Arnaud and Naja Girard…

According to FWC, the concerted efforts of officers resulted in the apprehension of two dangerous wannabe cop killers living in the Wisteria island anchorage: On June 24 two transgender women in their 20’s were taken off their sailboat and charged with a combined 48 felonies and 5 misdemeanors including aggravated assault on police officers by a convicted felon in possession of a fully loaded high-powered AR-15 rifle and a hand gun. Aiyana X and Dakota Dalman were allegedly ready for a gunfight and pointing a gun at FWC officers patrolling the anchorage. The women were taken to the jail on Stock Island.

There is however another side to this story. Here’s what we found.

On June 22 and June 24 multiple FWC patrol boats were conducting sweeps of the Wisteria island anchorage searching boats for signs that they could qualify as “derelict vessels.” Under Florida law a vessel is “derelict” if an officer finds the vessel has “degraded or compromised vessel components.”

The anchorage group’s Facebook page was buzzing with the comments of outraged boaters who were watching officers break into liveaboard boats while most of the owners were at work. The comments were not kind to the officers. (We’ve decided not to identify anyone by name.)

“They should be held responsible. Don’t care if you’re state police, you’re still an intruder. What would happen if one of them went inside someone’s cabin and woke up an unsuspecting sleeping owner and got shot.”

“THIS IS REALLY BAD YOU CAN’T JUST WALK INTO SOMEONE’S HOUSE. IT’S THE SAME THING.”

Another boater observed the officers entering a cabin cruiser. She wrote: “They are on the boat with the built deck and going through all their stuff. This is fucked up.”

Aiyana X has a more colorful way of phrasing her feelings: “They are living out the lives of the dirty pigs that they are and should be spit roasted.”

Another comment by Aiyana was more concerning: “Anyone illegally boarding my boat is going to experience a grin and the whole span of my arsenal, one after the other.”

FWC has a way to get into the boaters’ private Facebook group page and had been monitoring comments. On the morning of June 22 there was an intelligence briefing at FWC headquarters informing the officers of the mounting tension resulting from the searches.

Yet the forcible entries into people’s boats continued and officers returned to the area on June 24.

“If they want to inspect vessels why don’t they just give us notice and time to correct?” says one boater, “This is pure harassment and has everything to do with big waterfront hotel owners.”

A photo of Aiyana X appears on the Facebook page. She’s standing tall on the deck of her boat, a pair of binoculars in one hand and a bottle of rum in the other, on her back an ominous high-powered rifle hanging from a shoulder strap. The caption reads: “FWC tyrants out again while yall work. Imao babe watching em tho.”

“It was an act,” Don Bilodeau later told us, looking at the photo of Aiyana. He lives next to the girls: “Aiyana – she is a little bit flamboyant. She probably thought she looked great as an ‘Action Girl’ out of Playboy Magazine. She wouldn’t hurt anybody.”

But at the time other neighbors did not feel safe at all. “With all we see on TV lately, I’m sorry, but I did not feel safe,” says one witness. I saw one of the girls on deck with the gun. I didn’t know if they were going to start shooting. My heart was racing.” That person called FWC.

Another neighbor also felt that the gun was a threat. “That was an AR-15. I know my guns. I was 35 yards away on my boat. I thought it should be reported.” He called the US Coast Guard at approximately 10 am.

The investigative report shows that by that time the officers had reviewed the Facebook page with photos of Aiyana X and probably the comments about spit roasting the “dirty pigs,” “pirates,” the “intruders” who “should be criminally prosecuted.”

FWC has yet to furnish us with requested copies of the body cam footage of the confrontation that followed, but at the time the girls were live-streaming their arrest on Facebook. That video shows each patrol boat approaching from a different angle, fully crewed with men armed with automatic rifles pointed at the occupants of the sailboat.

One patrol team comes alongside. Captain David Dipre tells the girls to hand over their guns.  “I have a report,” he tells them, “that you were brandishing a weapon at FWC officers.” The confrontation intensifies immediately. The girls yell that it’s not true. “We didn’t point it at anybody!” But Dipre insists, “That’s not the statement I have.”

Later that day we interviewed the two witnesses who had made the reports to law enforcement. They denied having told police that the girls had pointed the gun at anyone.

“The gun stayed shoulder-strapped the whole time, exactly like in the photo,” said one of the witnesses in a recorded interview. “They never pointed it at anybody.”

But Captain Dipre’s accusation has the immediate effect of escalating the already tense situation. A slew of surprisingly colorful profanity-laced insults begins to dominate the conversation.

Dalman tries to explain their point of view: “We don’t want no trouble but at the same time with you guys boarding people’s boats when they’re not home – that’s a little scary.”

The two refuse to let the officers come on board or look inside: “This is our home.” “We know our rights.” ‘No. You do not have permission. Get the fuck off our boat.”

So can the police forcibly come aboard your anchored live-aboard boat because you’re carrying a weapon on your back – in your own home?

“This is our domicile,” yells one of the girls referring to some Supreme Court ruling about the Second Amendment and people’s homes.

In the video it seems that there’s a moment of hesitation, where the officers are determined to arrest the girls but don’t exactly have the angle.

Suddenly one officer observes that the vessel is not showing its hull identification number, which should be stamped on the transom of the boat. “That is a misdemeanor of the second degree,” announces Dipre and he immediately proceeds to climb aboard the boat to arrest Dakota Dalman and Aiyana X. Aiyana cries bloody murder, the phone falls to the floor and it becomes impossible to see what’s going on.

FWC ended up charging the couple with a combined 73 criminal violations.

The problem is, when we made a public records request to Putnam County, New York regarding the alleged past felony convictions we received documentation clearly indicating that Aiyana’s two cases were adjudicated as one misdemeanor and one county code violation.

Yet FWC’s probable cause statement, filed with the court, relies on the investigator’s affirmation that he found felony convictions for Aiyana, dating to two 2014 incidents in Putnam County. On the good faith of that report the judge set bail at $591,500 for Aiyana X. Dakota Dalman’s bail was set at $209,000.

“Nicholas [Aiyana’s birth name] always had a tough time integrating and finding acceptance,” said Aiyana’s mother, all the way through transitioning into a woman. But now she’s in love. Oh, she would never hurt anyone.” The heartbroken mother emptied out her retirement account to pay $30,000 to a Fort Lauderdale attorney to save her lost child from decades in prison.

On July 19 the office of the Monroe County State Attorney filed its official charges against the girls. The New York “felony convictions” must have indeed been baseless because all of the weapons charges were dropped.

The only charges left against Aiyana X concern her bizarre behavior while being arrested and transported to jail. She allegedly attempted to “arouse the officers.” We’re not making this…

Read More:Key West The Newspaper – ANOTHER ARMED CONFRONTATION BETWEEN FWC AND KEY WEST