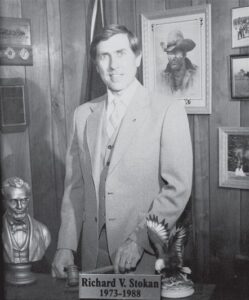 Stokan – well-respected by his peers and the community – was known quite well for running a tight ship in the department. Stokan took office in 1973 and retired in 1988.

His 16 years of service are the second longest for a sheriff in Huron County.

Hanson worked under Stokan for several years. He was originally hired in 1982 as a part time deck hand working patrol boats in the summers, before being hired full time in 1984 as a deputy.

Hanson said under Stokan’s watch, the department was one of the better equipped in the state for its size. He said to achieve this, Stokan many times had to go to bat for the department with county commissioners.

“He got himself into some jams with some of the board of commissioners, but the clashes he had I can tell you, were for the betterment and for the sheriff’s office, period,” said Hanson. “He was always looking out for it.” 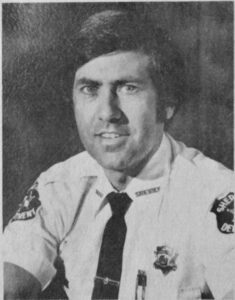 “The equipment we had back then was a lot better than any other counties of our size… Sometimes that’s what it takes. If something’s wrong or whatever the crusade is about – you have to get into that. There’s no two ways about it. He was about the place, for sure.”

After previously spending time in Bad Axe, Stokan came back to the city in 1962, where he worked several jobs, including being a part time Huron County Sheriff’s Office deputy. In 1972, he decided to run for sheriff, and took office Jan. 1, 1973.

“I got to know him through police work. I found him to be very aggressive as far as looking at the future – he really equipped his department really well,” said Bodis. “He very much so liked everybody to be a professional – everybody better look neat and professional and his equipment and everything was always meticulously kept clean, as well as the jail.”

Currently, the sheriff’s office and BAPD work very closely together. Bodis credited Stokan for the start of that conducive relationship.

Stokan was Huron County Sheriff for 16 years before taking a job with the Michigan’s Sheriff’s Association.

Aside from his family and work in law enforcement, Stokan’s other love was horses. Stokan always had them and loved them dearly.

According to his daughter Sue Morell, when he first moved to the county, her father had a riding horse. From there, it went to multiple other breeds. As he got older, it changed to Haflingers, which they began showing competitively across the state and beyond.

“It was a big thing,” said Morell. “He absolutely loved showing horses. He could drive a cart, a single cart, double, unicorn, he could drive a 4-horse pitch, and what was called a tandem. …He got very good at doing all of that and we had a lot of fun doing it. It was a lot of work, but it was fun work.”

He was also remembered as being a very charitable individual.

Both Hanson and Morell recalled many times where people in need in the community were randomly, and unknowingly, helped out by Stokan.

“He was a very generous individual,” Hanson said. “If people needed help, he would step up and help out.”

Morell recalled, just three weeks before her father’s death, while he was very ill himself, he went out and checked on the farm of another friend that was in the hospital.

“He would do things – he never wanted recognition for it, he never did it to get something for it – it was something that had to be done, so he made sure that it got done. …He would help anybody out. If something needed to be done, he would go and take care of it. That’s just the type of person he was. He could be very stern when he needed to be, but he had a very big heart,” she said.