Finding a boat that offers the right combination of comfort and performance is rarely easy. Every boat is a compromise, and you have to choose your priorities.

Then of course there’s the emotional element, which defies rational analysis.

As Phil Nicholas, the happy owner of a Maxi 1100, puts it: ‘I’m mindful of the saying that unless you’re a ferryman or a fisherman you don’t need a boat. For us, it had to be a love affair.’

To some people, like Phil and his wife Julie, a boat’s appearance and what you feel for her are important. 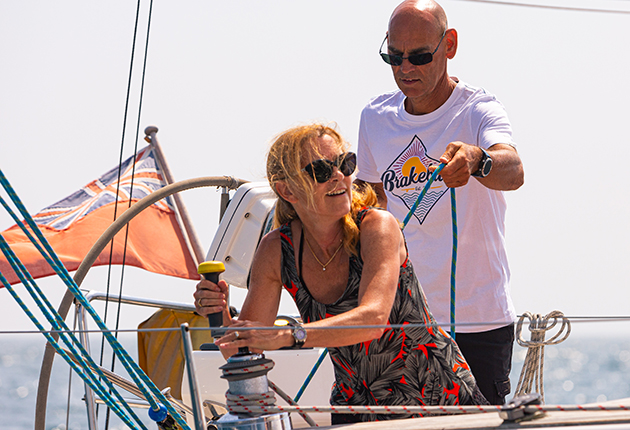 ‘When you look at so many modern boats with their towering topsides they’re really not elegant,’ he says. Few of us would disagree.

Given Phil and Julie’s enthusiasm for their boat, coupled with the amount of time they spend aboard and the number of miles they have covered, you might imagine that they had owned a number of yachts before buying Destiny.

In fact they hadn’t. Julie’s uncle ran a sailing club on the Thames, where she sailed dinghies as a child, while Phil had owned a series of small motorboats between some early dinghy sailing before succumbing to the urge to buy a cruising yacht. 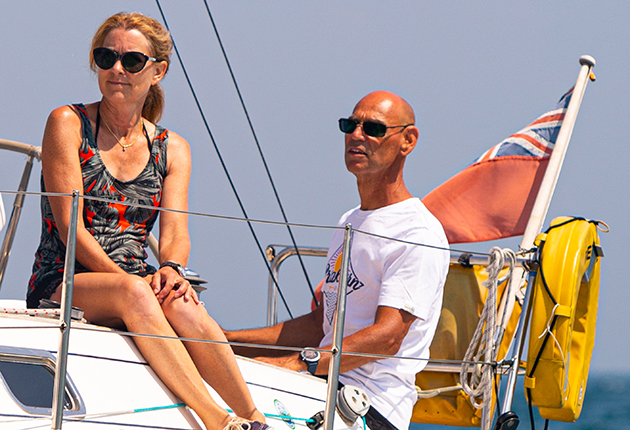 Phil Nicholas started sailing in dinghies before moving to small motorboats and then bought the Maxi 1100 in 2007. He and his wife Julie have cruised extensively, while Phil also races the Maxi 1100 and on a variety of other boats. Credit: David Harding

The Maxi 1100 proved to be that cruising yacht. Once the urge had lodged, Phil became ‘a serial boat-show goer’ even though, when he started, he was still several years away from taking the plunge.

‘I liked Beneteau’s First 31.7,’ he explains, ‘but I kept coming back to the Maxi 1100 for four or five years despite not being in a position to start looking seriously.’

Those of us who have been in the boat-sales business will recognise a message in Phil’s story: ignore someone just because he’s not about to write you a cheque there and then, and you might lose a sale a few years down the line.

Buyers of sailing yachts are often on a slow burn. So that’s how the Nicholas family came to buy a family cruiser – son Luke came along later – and it’s now 14 years on.

In that time, Destiny has covered a good many miles around the south coast from her base in Poole, both cruising and, though not initially, racing too.

Much of the racing has been with Poole Yacht Racing Association (PYRA). Phil had given no thought to competitive sailing at first. 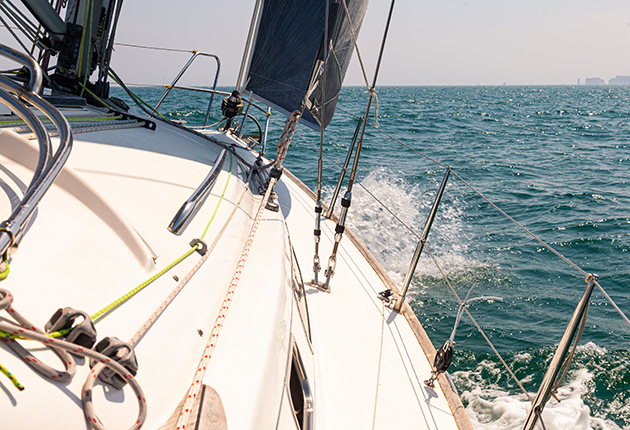 Barber-haulers and blocks for the spinnaker guys are attached to strong-points inboard of the solid wooden toerail. Credit: David Harding

He did, however, sail throughout the year and quickly learned that 20 knots of wind on a hot summer’s day is very different from 20 knots in the middle of winter.

Then, on the way back from the Solent one day, he found himself in the midst of a racing fleet heading the same way.

‘We asked what was going on, found it was PYRA racing back to Poole, and have been racing with them ever since,’ he says.

Given the way things have turned out, it’s just as well that the Maxi 1100 is capable of giving a good account of herself on the race course.

Regular PYRA competitors include everything from an Elizabethan 29 to a 50ft ex-Admiral’s Cupper, so Destiny sits pretty much in the middle size-wise even if she is closer to the cruising end of the spectrum. 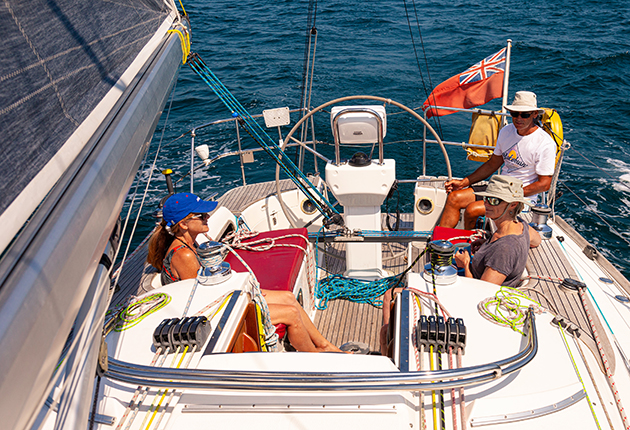 The cockpit, with its high and comfortable coamings, provides plenty of space for leisurely sailing and also works well with a racing crew. Credit: David Harding

Weighing in at over 6,000kg (13,000lb) she’s appreciably heavier than many comparable boats and, not surprisingly, goes best in a breeze.

Phil’s racing results show that, when the wind picks up, Destiny can outperform a lot of boats that one might expect to be faster.

It follows that light airs are not her favourite conditions, especially upwind when the relatively wide sheeting angle on the minimal-overlap headsail limits her pointing ability.

Phil suspects that the Maxi’s keel profile might not allow her to point higher even if the sheeting angle were narrower.

He knows that he can’t rely on boat speed to be competitive in under about 6 knots of wind and that other strategies are needed – which he often deploys to good effect.

He also accepts that, had he bought a boat principally for racing, he would probably have chosen something else. ‘For the reasons we bought it, the Maxi 1100 has been ideal,’ he says. ‘For racing, I could use more of a boy’s boat that I could bash around a bit more – something like a Sun Fast 3200 or a JPK’.

On a boat with a nicely finished mahogany interior, bundling wet spinnakers down the hatch is something you try to avoid unless you have plenty of protection in place for the woodwork.

It’s the sort of compromise faced by many people who cruise with the family and race with friends, but the Maxi 1100 has proved to be a pretty successful cruiser-cum-racer and has stood up well to being treated from time to time in a way that Phil hadn’t envisaged when he bought her.

Her interior looks remarkably fresh for a 14-year-old boat. It’s testament to the way she has been looked after and to the way she’s built. 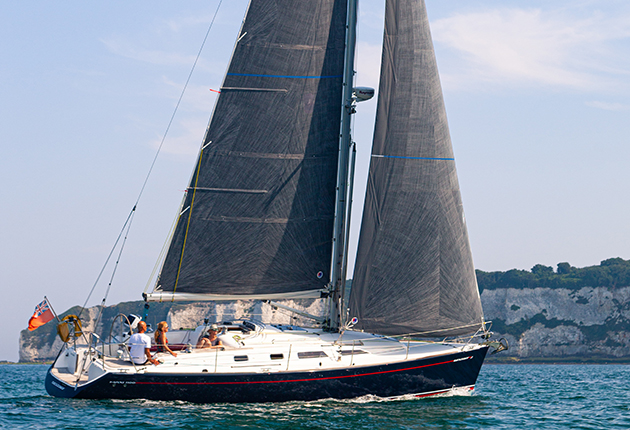 Destiny’s sails are carbon with a double taffeta for durability. Credit: David Harding

There’s no doubt that she’s several cuts above the average in the way she sails, too.

I have seen Destiny and other Maxi 1100s – including Maxi Magic, which graced Yachting Monthly’s July 2021 cover – racing and cruising in a wide range of conditions and have always thought they look pretty competent all-rounders.

When I went for a sail with Phil and Julie, we had winds that were on the light side of moderate, so it was interesting to see how Destiny handled in 8-10 knots and the sort of chop that even a gentle easterly often kicks up in Poole Bay.

For a relatively heavy boat with a small headsail, the performance was impressive. 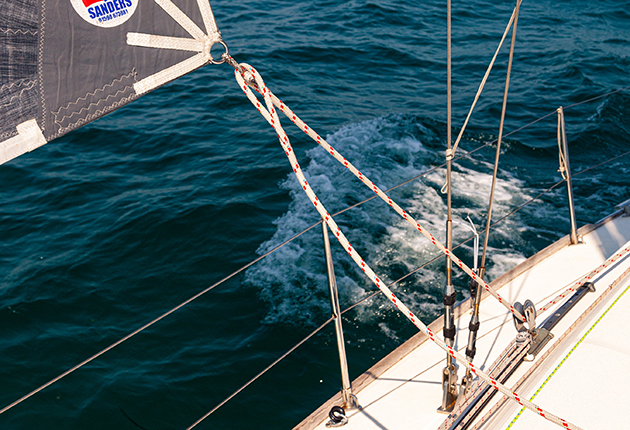 The minimal-overlap headsail sheets to tracks on the coachroof, though the sheeting angle is wider than on racier boats. Credit: David Harding

The Maxi 1100 comes with genoa tracks fitted as standard but the majority of 1100s have never used overlapping headsails.

Phil has found the headsail settings that work best and, when the wind across the deck nudged 12 or 14 knots, we typically clocked 6.5 knots with the apparent wind at little over 30° in the flatter patches.

The rest of the time we had to keep the nose down a few degrees to punch our way through the chop, the Maxi’s weight and fine, rounded entry allowing us to do so quite comfortably.

Once she gets into her stride, she has an easy, relaxed feel. There’s no definite groove, so you don’t instantly know whether you have got everything right. 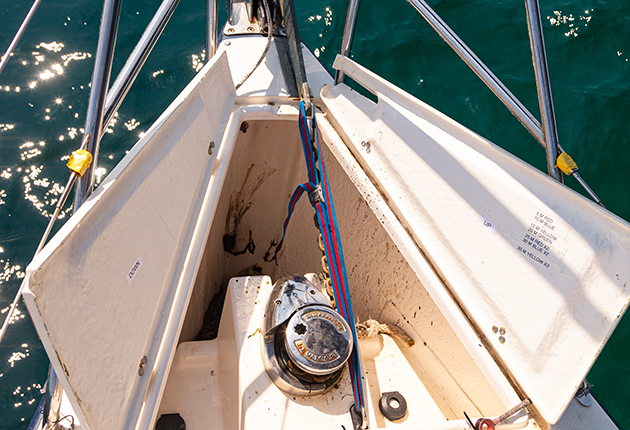 Not all Scandinavian yachts come with workable anchoring arrangements, but the Maxi 1100 has a double bow roller and a good anchor well with space for a windlass. Credit: David Harding

It’s a subtle process of getting to know exactly what the boat likes.

Whatever you do, the Maxi 1100 is nicely responsive to the wheel.

It gives good feedback from the rudder, has 1.5 turns from lock to lock and, with its 51in (1.3m) diameter, lets you sit comfortably on the coaming.

Both the mainsheet and the Lewmar 46 primary winches are within easy reach of the helm. 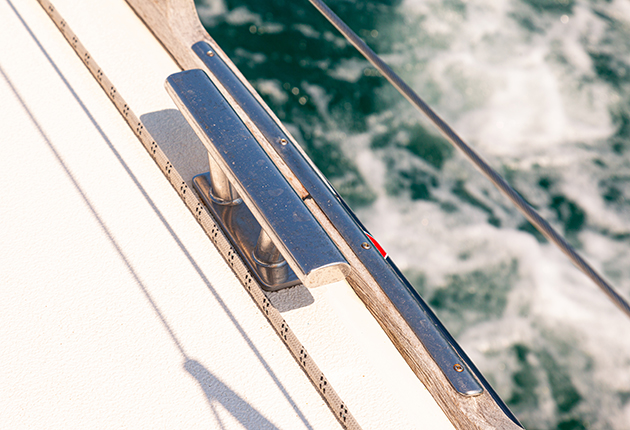 Stainless steel cleats all round are big enough to accept chunky warps, while chafing strips protect the woodwork and topsides. Credit: David Harding

As Phil says: ‘One of the good things about this boat is that it is of a size and layout that you can manage singlehanded.’

In heavier conditions, Destiny has never given her owners any concerns – and much to be grateful for.

On one memorable trip from Brest to Ushant, they were flying the kite in 20 knots of wind with the autopilot in charge and the crew sunbathing in the cockpit as they surfed down the waves at 10 knots.

The highest speed to date has been 14 knots.

Sensible upgrades to the Maxi 1100

Being keen to sail the boat efficiently, whether racing or cruising, Phil has made sure all the rig and sail controls work.

Most of the hardware and systems were fitted from new, such as the jamming foot-blocks for the headsail sheets, but he has upgraded quite a lot…