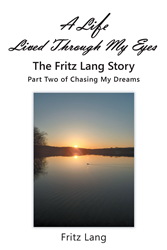 Lang shares, “Volume 2 is a continuation of volume 1, where a young boy named Fritz was growing up in Germany during and after World War II. Volume 2 begins in 1962 with him stepping off of an ocean liner, the SS Bremen, as a young man of twenty-four in New York City Harbor, ready to experience the adventure of a lifetime! As you will see, as a greenhorn, he had to overcome some challenging hurdles in order to enjoy the sweet fruits of life.

“After 2 years of working long hours in the construction industry, he started his own company and in 1966 built a houseboat 36 feet long by 12 feet wide. In 1970, he married a Scottish woman. Two years later, he had a son named Darren and shortly after that started the Frilan Co. Inc., a wholesale distribution business, which supplied colonial wood products to about 150 lumberyards. However, skyrocketing inflation rates in the 1970s had a negative impact on many businesses which struggled to survive. In 1974, he built his house in Dutchess County, New York, and began building churches all over the United States. He also revived his acting hobby. He took some college courses and got back into the entertainment industry, performing in movies and television, just as he had done when he was a young man in Germany.”

Consumers can purchase “A Life Lived Through My Eyes: The Fritz Lang Story: Part Two of Chasing My Dreams” at traditional brick & mortar bookstores, or online at Amazon.com, Apple iTunes store, or Barnes and Noble.

For additional information or inquiries about “A Life Lived Through My Eyes: The Fritz Lang Story: Part Two of Chasing My Dreams,” contact the Christian Faith Publishing media department at 866-554-0919.

Read More:Part Two of Chasing My Dreams” is an engaging continuation of the author’s memoir series