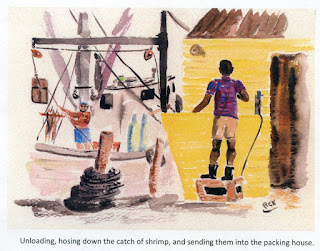 This is the first part a story titled, The Sponge Adventure. Captain Bob and his two mates, Dave and Amos fish the Gulf out of Key West in Bob’s sea-going Trawler, Sea Breeze. Dave is interested in the old methods of sponge fishing and has a small skipjack fishing boat he has just restored.

David had been hosing down the shrimp in the hopper, and then hit the switch that turned on the conveyor which took the catch into the packing house. The men were unloading their catch on the Key West city docks. The packer and processor was the Singleton Fish and Ice Plant. In an hour or so their shrimp would have their heads removed, packed in wooden crates, and iced for shipment. At one time the Singleton Plant was the largest in the world.

David was a 27-year-old Afro-American. He had a close hair cut, was five foot nine inches, and was thin but muscular from the hard work required on a shrimp trawler.

They had been out for three days in the Gulf on Captain Bob’s ocean-going trawler “Sea Breeze.” Talk about a haul! This morning they had stumbled into a mess of shrimp. It was the pink shrimp. They had been “Midwater Trawling”* just offshore near the Dry Tortugas Key.

Their hold was full, and they had come right in to get it unloaded, cleaned and packed. It had taken a couple of hours so far, of shoveling the shrimp into the large stainless steel unloading bucket and winching it to the hopper where David was working.

Amos, was a 42-year-old Afro-American who had been with the Captain since he bought the “Sea Breeze.” In fact they had worked together before on another trawler. Amos was 6 feet 2 inches tall and well built.

The stainless steel bucket swung out and over the boat and stopped right above where David was working.

“Dump it, Capt’n,” David hollered. The 80 pounds of shrimp tumbled into the hopper.

Pink shrimp* is what is harvested mostly in the Florida waters. There are three other species found in the Gulf of Mexico and South Atlantic waters: Brown, White and Royal Red.* Shrimp replenish themselves fairly fast. Their life cycle is 13 months. That is a rapid reproduction rate.

Captain Bob was 54 and about five foot nine inches. He was filled out but not fat. He had a round face with a full black beard showing faint signs of becoming grey. He was an Anglo of German descent.

David hollered, “The packer wants to know how much more Capt’n?”

“Tell him a couple more loads,” Bob said. “As soon as I get the last to you, Davey, come on board, and we’ll get the boat cleaned up.”

The Sea Breeze was a sea-going trawler.* It was 60 feet in length. This boat was built with the lines of the Greek shrimp boats. Instead of the V-shaped hull it had a rounded cross–section. The bow was high with a deck house located forward. This left the stern for hauling in the nets. The rounded hull shape made a deep and slow roll at sea and a boat that could take rough seas. It was built in 1960 by the Diesel Engine Sales Company (DESC)* of St Augustine, Florida, one of the largest shrimp boat builders in the USA.

Captain Bob’s boat was a traditionally built boat, with a pine keel, white oak frames, and cypress planking. One item to note: when the cypress planking became too expensive, the boatyards shifted to yellow pine. But Bob felt fortunate his boat had the cypress.

Captain Bob Mitchel had this boat for the last five years, since 1964. He was in the fishing business since he graduated from high school in 1933. His fishing was temporarily postponed in 1941 when he joined the US Navy. Bob saw service on a destroyer until the war’s end in 1945. He then bounced right back here to Key West and resumed his love of the sea.

After that Bob saved every penny he could. He was fortunate to find some silent backers that let him run the show. Now Captain Bob was 51% owner of his own fishing boat and business.

“We finally got it cleaned. Thank you guys. It was a lot of hard work, but we made some cash,” Bob exclaimed. “Start her up, Amos, and let’s get her over to our slip.”

The 300 HP Detroit Diesel engine sputtered, coughed, and caught… and the heart and soul of this boat roared! They pulled away from Singleton’s docks and went out into the channel and then to the marina the “Sea Breeze” called home. The marina had three sections: commercial, fishing excursions, and private. Amos shut her down. They tied up to the dock posts and jumped onto the pier.

As the three walked out to the parking lot, Captain Bob said, “Tell you what guys…give me some time to get the paperwork done. Stop by the house tomorrow morning, and I will have your checks ready.” He just didn’t know how long they would be out, so consequently Bob never could have the guys’ checks made out ahead of time.

“Sounds good, Amos. See you then.”

“No thanks, Amos,” Bob and Dave said in unison.

They both lived within walking distance of the marina, six to eight blocks.

“Well, I’m glad it’s Friday, David. I’m tired, What’re you going to do this weekend?” Bob said as they walked along.

“I’m going to be working on the skipjack,” David replied.

My second full-length book , Florida Keys’ Watercolor Kapers is composed of 336 pages. There are 12 stories running from 6 pages to as many as 72 pages. It is fully illustrated with 88 watercolors and sketches. The watercolors I made roaming around Key West after I finished my 750 mile hike from Georgia to Key West. (See book or Don Browne’s SouthWest Florida Online news records, A Walk Across Florida.) As you read these stories you will experience Key West, the Keys, and the Caribbean. These stories span the time of the early 1800’s to 1969. bkranich.wixsite.com/bobkranich