(The riverboat captain is a storyteller, and Captain Don Sanders is sharing the stories of his long association with the river — from discovery to a way of love and life.)

No sooner had the last passenger scrambled from a taxi and across the swinging stage resting on the ancient cobblestone grade at St. Louis, the DELTA QUEEN lay primed and anxious for departure. 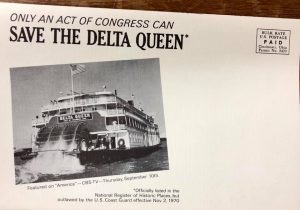 The QUEEN, scheduled for New Orleans, was destined to tie up there and never run again carrying more than 50 passengers in the overnight cruise trade.

“Here, Benton, ring the bell for the last time,” I shouted to the young man who, with his doctor’s consent, had signed on as a porter for the last week the most famous steamboat in the world at that time would likely operate. The QUEEN, scheduled for New Orleans, was destined to tie up there and never run again carrying more than 50 passengers in the overnight cruise trade.

Benton Roblee Duhme, the scion of a local family famed for manufacturing quality footwear sold under the trade names Roblee, Buster Brown, and Mary Janes, preferred to be a steamboatman instead of a shoe company executive. This “Last Trip of the DELTA QUEEN,” however, would also be Benton’s final time on the Mississippi River because of a terminal illness. Besides, young Duhme loved the QUEEN so much he would do anything to be on board – even if that meant carrying heavy luggage, scrubbing pots and pans, and hustling overloaded trash containers when most people in his condition might be considering hospice care. 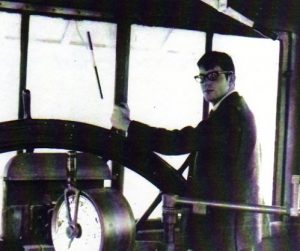 Benton Roblee Duhme preferred to be a steamboatman instead of a shoe company executive.

Immediately, following Benton’s signal, Pilot Charlie Fehlig blew the final departure whistle as the DELTA QUEEN backed away from the St. Louis levee at 9:35 AM… “one last time.”

By noon, the QUEEN passed Kennett’s Castle, Mile 247, Upper Mississippi River, averaging a speed of better than 12 ½ MPH. At 3:30, the DELTA QUEEN met the steam dredge U. S. KENNEDY at Potato Bend, Mile 97, and by watch change at 6 PM, the boat was at Shepherd’s Light, Mile 63.4, for a distance of 83.6 miles run since passing the Castle for an increased downstream speed of 13.9 MPH.

Shortly after midnight, Thursday, October 29, 1970, fog slowed the DELTA QUEEN after averaging almost 14 miles-an-hour, a racehorse-like speed for the elder steamboat. Eventually, decreasing visibility forced her to “choke a stump” half a mile below Milton Bell Light, Mile 907.5, until the pea-souper lifted close to 9 AM. Once the fog dissipated, Captain Harry Hamilton, the forward watch pilot, continued until noon to Cherokee Light, Mile 867.3, where Captain Fehlig regained control and landed at Caruthersville, Missouri, from 1:45 to 3:10 PM. There, a crowd of several thousand well-wishers waiting at the landing thrilled to see the DELTA QUEEN for “one more time.” 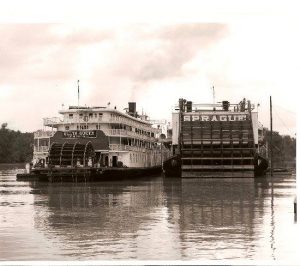 Meanwhile, on the Main Deck, near the head of the boat, Benton, myself, and other crewmembers watched in fascination at the rousing reception given by the Caruthersville fans of the QUEEN.

Later that evening, around 9:15 PM, a passenger, Miss Blanch Watts, 86, staying in Room 208, died of an apparent heart attack. According to the Log, “Ship’s physician, Dr. M. J. Schneider, was called to the room. The victim died before she got there.” Apparently, the “ship’s doctor” was a woman, which may not raise an eyebrow at this writing 51 years after the fact, but though female doctors were not uncommon in 1970, it was unusual for one to be aboard the DELTA QUEEN, that I recall.

Generally, these days, overnight river passenger boats do not carry a physician of either sex on their cruises. Instead, they may employ trained EMTs or other crewmembers to tend to the medicinal needs of passengers and crew. (Please feel free to correct me if I err. Aboard the Casino Boats, there was always a Certified EMT on duty whenever passengers were on the vessels.)

What I do recall, though, were the frail remains of Ms. Watts wrapped in her stateroom blanket reposing within the wire Stoke’s Litter, commonly called the “dead basket,” upon the main Deck starboard life-preserver box with the lights of Beale Street at Memphis aglow beyond where the QUEEN landed to await an undertaker to carry the little lady ashore. All around Miss Watts, the boisterous crew eagerly and nosily anticipated their share of a 12-hour shorestop where Beale Street beckoned. Within less than an hour after landing, the hearse arrived and removed its somber consignment. No one seemed to miss the elderly lady from Room 208 who left behind the blanket tossed nonchalantly within the empty “dead basket” still resting atop the lifejacket locker. 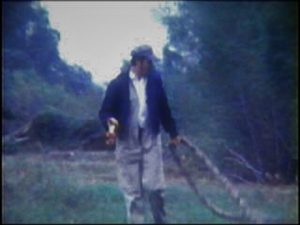 For some strange reason, I was wearing tan coveralls and an odd-looking railroad cap while I helped with the lines. (Photo Joyce Sanders)

That following afternoon, at 5:50 PM, the paddlewheeler landed below the Helena, Arkansas Highway Bridge to “put off a NATIONAL GEOGRAPHIC photographer.” Though I cannot recall the photographer’s name, he had been aboard the DELTA QUEEN off and on all year to document what was likely the last year the steamboat would operate carrying more than 50 paying persons in the overnight river trade. In the usual GEOGRAPHY storytelling style, a central character is often selected as a focal person to move the story along and add human interest to an otherwise inanimate object – a steamboat in this particular case. In this instance, I was that intermediary individual. Had the DELTA QUEEN failed to acquire an exemption from the so-called “Safety at Sea” law before the end of 1970, I would have been the featured person in a documentary film recording the last year of the QUEEN.

Thankfully, a “rider” introduced to a bill in the U. S. Congress by Kentucky Senator Marlow Cook of Louisville saved the glorious steamboat at the last possible moment, so the GEOGRAPHIC film was never released. Nevertheless, with the passage of over a half-century, the footage shot during the “last year” should indeed have an intrinsic, historic value of its own. Perhaps the footage may still exist in some forgotten vault, but the chances are slim to none. 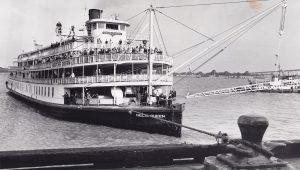 As the DELTA QUEEN made its final approach to the Poydras Street Wharf, a stiff wind blew the steamboat straight out into the river; perpendicular to the dock like a giant fish caught on a cable. (Photo New Orleans Picayune)

On Halloween Day, Saturday, October 31, at 9:20 in the morning, a small government boat, the M/V PAT II, “took Mr. Muster and another photographer off at Lake Providence to be picked up on a sandbar by a helicopter,” according to Captain Ernest E. Wagner’s handwriting. As all fans of the DELTA QUEEN know, Captain Wagner was the austere, though often genial Master of the QUEEN.

Around 1:30 that afternoon, the steamboat landed alongside the retired Steamer SPRAGUE, the largest steam, sternwheel towboat ever built, for a command performance of “Gold in Them Thar Hills,” a melodrama presented exclusively for those riding the DELTA QUEEN on its “last trip.” By 10:30 that evening, after the applause faded from the final performance aboard the SPRAGUE, the QUEEN once again entered the relentless torrent of the Mississippi River.

By 4:30 AM, Sunday, November 1, she was all-fast at Vidalia, Louisiana, across from historic Natchez, Mississippi, where several hundred well-wishers crowded the shores on both sides of the river to witness her 12:20 afternoon departure for “one last time.” Before midnight, Captain Hamilton skillfully guided the DELTA QUEEN through the crowded riverfront at Baton Rogue. 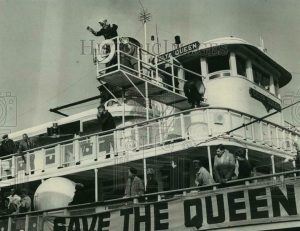